Zombies Vs. Unicorns by Holly Black
My rating: 5 of 5 stars

So, look at the dates–I devoured this book. Precisely for the reasons I picked it up in the first place…the fabulous premise, and the spectacular lineup of authors.

I didn’t love every story, of course, but I don’t think I’ve ever loved every story in any anthology. I liked them all, though, and I did love some of them. That’s a tricky enough task, though, and enough to get it five stars from me.

I especially enjoyed the running debate between editors Holly Black and Justine Larbelestier as they defended their respective teams (Team Unicorn and Team Zombie, respecectively) in the introduction to each story. I think this book must have been as much fun to put together as it was to read.

The Third Gate: A Novel by Lincoln Child
My rating: 3 of 5 stars

Okay, this was a pretty good book–the storyline was interesting and it had several novel elements (no pun intended). Overall, though, I was left feeling kind of unsatisfied. It felt like there was room to do a lot more with the ideas, but the author didn’t explore those possibilities. Also, too many things were telegraphed ahead of time to make the “big reveal” much of a surprise. And somehow, the characters fell just short of being people rather than “types.”

The audiobook was well-read–no quibbles at all with the production values.

But it’s another example of something I see all-too-often lately–books from trad publishers that demonstrate the need for better editing. Honestly, I was really surprised to look back and see that this was a book from a “name” publisher. I can’t fault the author for this–it’s the editor’s job to make that final pass and weed out repeated words, odd sentence construction, etc. Sadly, it’s the author who ends up looking bad when the editorial staff falls down on the job.

However, it’s a good summer read if you’re not too picky about everything being factually correct and you’re willing to get on board for the ride. There was enough interesting stuff going on to keep me listening right through to the end.

Tesseracts Fifteen: A Case of Quite Curious Tales by Julie Czerneda
My rating: 4 of 5 stars

As usual with an anthology, this is a mixed bag–some stories I liked better than others–but overall a very strong selection of stories and very enjoyable. It’s nice to find a group of authors who really “get” writing YA. The editors have done a good job putting these stories together.

Airborn by Kenneth Oppel
My rating: 5 of 5 stars

I loved every minute of this amazing book! The audio version is by Full Cast Audio, and they made the book and characters come vividly to life. Finishing it made me feel the way you do after an exquisite meal–you want to go right back and eat the whole thing again. If you like YA adventures, put this one at the top of your list. You won’t be disappointed.

The Passage by Justin Cronin
My rating: 4 of 5 stars

It’s hard for me to decide what to say about this book. I listened to the audio version, and I feel quite certain that if I’d been reading print, I would have given up partway through. However, since audiobooks let me multitask, I’m a bit more forgiving, and I did keep listening. The author takes a very big risk structurally with this book, in my opinion, and it was at that point, less than halfway through, that he nearly lost me.

That said, I did become re-engaged with the book and ended up really enjoying it. Although it’s the first of at least two (and maybe three, I’ve heard) in a series, I haven’t decided yet if I’ll read the others. The end of this book leaves many things unresolved, and yet I can imagine the characters into an ending I’d like, if I want. So, we’ll see when the next one comes out.

The book offers a number of very strong characters, and a solid storyline. I think it could have been somewhat shorter, and there’s a lot of passive voice (which I’m surprised survived the editing process), but overall the writing is good and flows very well in audio.

I suppose it’s a “vampire” novel, and yet it’s not, either. Worth trying out if you can overlook the few flaws, and persevere past the jarring timeshift (I don’t consider mentioning this to be a spoiler; it happens less than halfway through the book, and honestly I would have preferred to know it was coming).

The Know-It-All: One Man’s Humble Quest to Become the Smartest Person in the World by A.J. Jacobs
My rating: 4 of 5 stars

I like to throw a little non-fiction into my reading list from time to time, and I really enjoyed this book. I found I read it in small bites, almost like reading the encyclopedia itself. :) The author writes engagingly and does a great job of interweaving his actual reading quest with the events of his life during the same period. I also learned a few things along the way. Highly recommended! 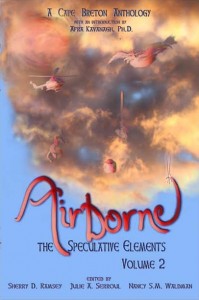 I’ve just finished creating the e-versions of Third Person Press’ new anthology release, Airborne. While I was at it, I created new formats for our first anthology, Undercurrents, which previously existed only in .pdf format. I did that because with Jutoh from Anthemion Software, it was so easy.

I’ve spent some time experimenting with, and ultimately being frustrated by, other ebook creators (this over a period of several years). I’ve tried some that were proprietary and some that claimed to handle multiple file formats, but it seemed to me that all of them were difficult to figure out, required enormous and time-consuming amounts of hand-correcting, or simply did not produce properly-formatted, readable output in a reliable way. Then I was fortunate enough to stumble upon Jutoh.

I was already a fan of Anthemion’s Writer’s Cafe, which I know I’ve spoken of here before in glowing terms. I don’t tackle any large writing project now without using its Storylines feature to keep track of my…well, storylines. I rarely write a short story without using it, either. I can see after using Jutoh for just these two projects that it has also become an indispensable tool for me.

My other reason for heaping praise on Anthemion is the absolutely superlative support offered. Questions are answered promptly and personally, and guidance is always close at hand when needed. Their software is also extremely reasonably priced. Writer’s Cafe is $45US and Jutoh is $32US…although buying both together nets you a deal on Jutoh. As a registered WC user already I inquired about the Jutoh discount and was promptly afforded it. I really can’t say enough good things about the support!

As for usability, with Jutoh I was able to take an already-heavily-formatted, multiple-chapter document and convert it with only a minimal amount of hand-formatting into epub, mobipocket, and Smashwords-ready formats. Other formats are also available, as well as export as an .mp3. I expect that the program would have dealt even more handily with a document that was not already extensively setup for its print format. Next time I will create the ebook version first and then do the formatting necessary for print, and see how that works.

The user interface is easy to understand, and upon launching a new project, a wizard walks you through the process of getting started. I particularly like this feature, as opposed to some software programs that seem to sit smugly waiting to see if you will be able to figure them out. In addition, Jutoh has an excellent help file which opens in the workspace, so that you can read instructions and carry them out without a lot of switching back and forth between windows. A sample file is included if you need some visual cues to get started with the program. A built-in “check” feature also reviews ebook files after they are compiled, and offers warning and error messages when problems are encountered. A cover designer with several templates lets you create a cover easily if you don’t already have one.

I did encounter a slight error when using the “find” feature, however, the program automatically generated an error report which was submitted to the developer, and I had a reply to that report in short order. That’s what I mean about the superlative support–they’re actually paying attention to their customers’ experiences with their products. I have seen this in action before with the mailing list for Storylines, where there is a lot of interaction between users and the developer so that everyone’s experience of the program is improved.

If you are interested in creating ebooks of any sort in multiple formats, I recommend Jutoh very highly indeed.

I intended to listen to just the first episode or two of this audiobook to see if I liked it, while I was working on some things for Second Life; ended up putting it on my Zune and devouring it. The humour is engaging, the production is good, and the story is just fun overall. A great read/listen!

View all my reviews.