Enter now to win an ebook copy of the new Olympia Investigations novella, Toil and Trouble! 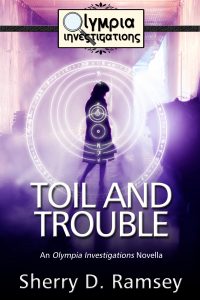 Inside Job by Connie Willis
My rating: 5 of 5 stars

As usual, reading anything by Connie Willis makes me wish I’d written it. I consider that the highest compliment I can pay a writer. :)

Take Us to Your Chief: And Other Stories by Drew Hayden Taylor
My rating: 4 of 5 stars

An intricate mix of sly humour and sadness, I enjoyed these stories partially because they helped open a window for me that had previously been closed. I do love to see the many incarnations that science fiction can take, and I’m glad that the author set his hand to these. It’s not all fun and games as many stories strike a serious note, and the stories swirl with poignant undercurrents. However, there are not enough intersections where science fiction and aboriginal fiction meet and travel together for a time, so I’m very happy to have read this one.

For a number of years, I ran a couple of successful email courses through The Scriptorium; one was called “The Two-Week Short Story” and the second was “Short Story Workshop for One.” People seemed to enjoy them and I received a lot of very positive feedback from students. The first was (rather obviously) a guide to coming up with a story idea and writing a quick, complete first draft, all in a two-week period. The Workshop was a method for writers who found it difficult to get feedback or critiques to work on developing the kind of critical eye needed to help them improve their stories on their own. The Short Story Workshop itself grew out of an article I had published in Speculations back in 2001, so it had already lived through one reincarnation. It occurred to me that they’d both probably translate well into short ebooks now, and that I might reach a new group of aspiring writers in that format.

Never one to let a good idea fail to distract me from what I’m really *supposed* to be doing, I set to work and did some revising, tweaking, and re-formatting. Also, cover design, since every good ebook deserves a good e-cover. I’m not quite ready to release the ebooks yet, since they need one more good going-over, but I’m thinking within a week or so they’ll be ready to go. But I can share those covers with you now (they might get a little more tweaking, but I think they’re pretty much done): 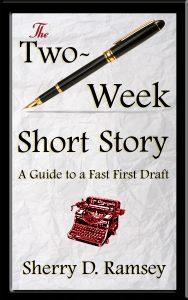 I expect to price the ebooks around $1.99, which will be a bargain considering the courses used to sell for $8.00 each! However, I did have the hassle of setting up the email schedule, so compared to that, selling ebooks is easy. I believe I’ll test these in Kindle Select at first, and then move to a broader platform after that, as my marketing experimentation continues.

If you or someone you know is looking for some story inspiration and motivation, or have a story that needs some intensive self-workshopping, I’ll be posting here when they’re released. Maybe you’ll find them useful!

Night Owls by Lauren M. Roy
My rating: 4 of 5 stars

I picked this book up initially because a writer friend mentioned it, and it sounded interesting. I enjoyed the author’s handling of the vampire ethos and her introduction of other unique elements into the world of the story. The characters are well-drawn and interesting, and the story surprised me several times. Would definitely read another in this series. Great paranormal/urban fantasy reading!

Coming Home by Jack McDevitt
My rating: 4 of 5 stars

I’m such a big fan of McDevitt’s Alex Benedict series, and I highly recommend them for anyone who loves space opera. This one did not disappoint!

The Occasional Diamond Thief by J.A. McLachlan
My rating: 5 of 5 stars

This was one of those books that, once I started it, I found it difficult to put down. The main character is intriguing as she finds her path between right and wrong, driven by the events of her past, her relationship with her family, and the secret behind it all. Along with that, though, it’s a great science fiction adventure tale told across fully believable worlds and civilizations. A great read for YA or adult lovers of character-driven science fiction.

The Star Thief by Jamie Grey
My rating: 4 of 5 stars

I really enjoyed this fast-paced novel–a blend of thriller and military scifi, with dashes of romance and humour thrown in for good measure. The characters are interesting and varied, and the strong plotline carries the story and keeps the reader turning pages. Lots of twists and turns, with much at stake for both the main character and the larger world. If you like science fiction adventure with a well-drawn female lead you should enjoy this one!

A Witch’s Kitchen by Dianna Sanchez
My rating: 5 of 5 stars

I was enchanted by this sweet and funny book, about a young witch who thinks she has no ability at witchcraft. Her apparent failings only hide her true talents, however! Along with being entertained (it was a hard-to-stop-for-the-night read), I was also appreciative of a more serious core that underpinned the story without intruding itself–it really spoke to me about finding and appreciating who we really are. But the overall feel of the book is light and fun, the characters are well-drawn, and the reading pace is quick. I’ll be delighted to introduce some of the young readers at the school library to it! Highly recommended for both young and adult fantasy lovers.

Admittedly I’m a bit biased, since I have a story in this anthology. However, I thoroughly enjoyed all the stories in the volume. Loads of intriguing tales and adventures that will have a wide appeal to readers of all ages and genders, covering a wide variety of subgenres of science fiction. I highly recommend this anthology for everyone who enjoys diverse stories of SF adventure and exploration.