I know I have a lot of catch-up blogging to do, so things are going to be out of chronological order for a while, but hey–that’s summer for you. 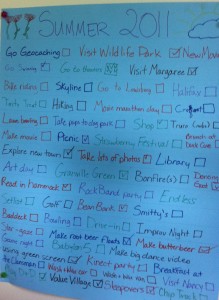 One of the items on our Big Summer Fun List was “make Butterbeer.” We enjoyed this very tasty treat at the Wizarding World of Harry Potter in Orlando this past spring, and of course at the time tried to figure out what ingredients went into it. We determined to try to recreate it at home.

A quick Googling of “Harry Potter Butterbeer” turns up many, many recipes purporting to duplicate it. Glancing over them, I quickly concluded that many of these recipes were NOT going to come close to what we’d sampled. I also discarded the alcoholic versions. There were still quite a few to choose from, but for our first attempt I thought this one looked like it might come close. I set out to collect up the necessary ingredients, and promptly ran into a couple of snags. 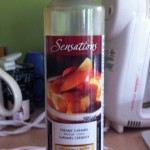 I couldn’t find any toffee-flavoured dessert topping, however I did find this caramel one, which seemed like it might be a decent substitute since it proclaimed itself to be “rich, creamy, buttery.” Next problem: you can’t just buy butterscotch-flavoured Dream Whip, nor could I find butterscotch flavouring, even at the Bulk Barn, which carries all manner of such things. So we were on to experimentation from the outset. 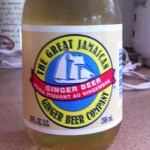 I did buy Coca-Cola, as called for in the recipe, but I also picked up a bottle of root beer, since we’d all thought in Florida that root beer must be on the ingredient list. Ginger beer was no problem to find at the grocery store.

So first we whipped up the Dream Whip. I followed the package directions, but reduced the vanilla to 1/4 tsp. and added a teaspoon of the caramel sauce. It whipped up nicely, but the topping that forms the “head” of the butterbeer was quite runny when we had it in Florida, and this was still fluffy. I added another teaspoon of the sauce and whipped that in, which helped some, but I think you would have to add a LOT of sauce to really get it to the right consistency. This turned out to be the most difficult part of the project, and one which we haven’t really solved yet. The taste was very close, but the consistency was not right. Anyway, we were ready to experiment. 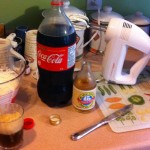 I still wasn’t feeling very certain about the Coke, so we did a small test glass and decided that no, it wasn’t right. So we switched to the root beer.

I did roughly follow the directions in the recipe. We added a tablespoon of the caramel sauce to the bottom of each tankard, then filled the glass about halfway with root beer. I used a small whisk to stir in the sauce, which caused quite a head of foam to appear! 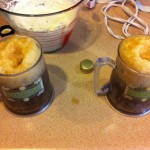 We added about half as much ginger beer as we’d had root beer, then a dollop of Dream Whip. Which of course, since it was fluffy instead of runny, just sort of plopped into the foam and floated. More research is needed in this department! I suppose one could skim off the root beer foam and then try to spread the Dream Whip on more smoothly, but the kids thought that the foam was delicious and would strongly oppose removing it. Hmmm…I wonder if we could skim the foam and mix it into the Dream Whip? (scribbles a note for next time)

Anyway, the finished Butterbeers, reposing in the mugs brought from Florida: 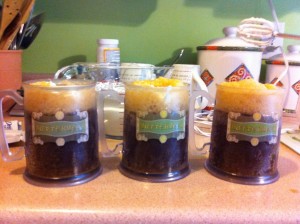 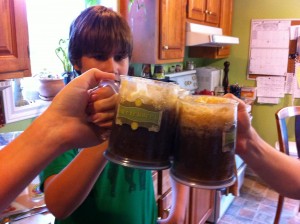 They were downed with great gusto and proclaimed a huge success. Indeed, they did taste remarkably as we remembered them. My husband opined that they were “fizzier” than the originals, so perhaps letting the root beer go partially flat might improve them. And the topping consistency still needs work. However, if you’d like an idea of what Butterbeer tastes like (without the expense of going to Florida), give it a try! Great on a hot day (although those are harder to find in Cape Breton this summer than the Room of Requirement).

Mix Dream Whip according to package directions, BUT reduce vanilla to 1/4 tsp. and add 2 tsp. of the caramel sauce (or more, if you’d like to try and make it runnier and increase the butterscotch flavour).

Add 1 tbsp. caramel sauce to the bottom of tankard. Fill about halfway with root beer. Whisk or stir gently to mix in the sauce. Add about half as much ginger beer as you had root beer. Add a dollop of Dream Whip. Enjoy!