Dark Beneath the Moon 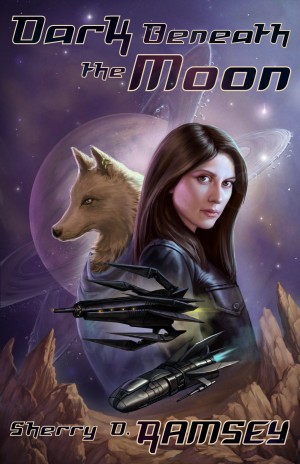 Luta Paixon has plenty of trouble on the Tane Ikai, with relationships in flux and the sticky problem of two captains on one ship. But when an alien artifact, the remnant of a long-ago war, shows up on the other side of a newly-discovered wormhole, the crew also find themselves pressed into the service of the Nearspace Protectorate. The Tane Ikai’s task: covertly deliver an alien historian to the site to decipher its meaning–and possible threat.

Jahelia Sord is a woman with a grudge against the world, and against Luta Paixon and her family in particular. She has her own secrets to guard, and an alliance with the notorious PrimeCorp–one she’ll keep only as long as it suits her own hunt for vengeance.

When a mysterious attack leaves them stranded in an uncharted new system, Luta, her crew, and Jahelia must try to put their differences aside and decide who to trust, while they uncover a shocking truth about the Chron war and what their old enemies are so afraid of…

Print Edition (autographed, personalized, and shipped within Canada): $29.95 (Please contact me via this form to order a copy)

“This is one of those rare yarns that you would like to go on for ever.” – 5* Amazon review

“It was a great sequel and I really enjoyed that the story had the perspective of two people.” – 5* Amazon review

“I basically couldn’t put it down.” – Goodreads review