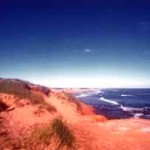 As some of you may know, I’ve been on vacation all the past week. I brought along lots of things to keep me busy in case the Muse had an opportunity to visit, but the chances of that happening were severely curtailed when my laptop screen died the night before we left home. I brought it along anyway–since there was some work for Airborne that had to get done, vacation or no–and a small external monitor allowed me to use it. However, after consulting with my resident computer expert (hubby), we decided that probably it would be expedient for me to shop for a new laptop. With some trepidation, I did so, with the result that I’m typing this now on a new HP ProBook. I’ve spent quite a few hours copying and moving things from the old machine to the new one, and I think I’m pretty much there. It’s a nice fast machine with a pretty sweet keyboard, so I think I’m going to like it, although I wasn’t really ready to part with my old one.

In writing news, Airborne is done to the point that we’ve ordered the proof and it has been shipped, so if there are no problems with the proof when we get it, we’ll be ready to order copies. Whew! I feel a bit nervous calling it “done” until I’ve seen that proof, but it does feel like we’re almost there.

Two other writing notes–I’ve realized that one of the characters in the novel I’m writing requires a change of gender (not as part of the story; I mean I have to go back and rewrite him as a woman). And I’ll have more writing news come Monday. Stay tuned!