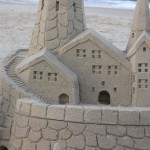 If you follow this blog at all, you’ll probably have noticed how v e r y s l o w l y the “percentage complete” number on my progress bar for The Murder Prophet seems to change. I’ve been working on a complete edit of this novel since early in the year (maybe even late last year?) and although I keep thinking I’m approaching the end, it sometimes (often!) disappears out of sight over the horizon again.

This is because rewriting and editing are messy jobs. You might think first draft writing is messy–and you’d be correct about that. First draft writing is like starting with a big pile of wet sand and trying to build something out of it. But if you’re lucky, at least you keep building up. The sand castle grows, takes shape, forms and reforms and sprouts turrets and towers, gets a moat and a defensive wall and doors and windows and finally a flag on the top. It may still be rough around the edges and missing some bits and your hands are still covered with sand, but it’s standing and you can point to it and say I made that.

The rewriting and editing parts of the job are the really messy parts. You have to scrutinize your castle and evaluate its foundations. You may have to lift it to put a basement under it, and hope that all the jostling doesn’t cause it to come crashing down. Some of those turrets have to be torn off and rebuilt, or scrapped and replaced with gables or a hipped roof instead. The moat’s too wide or too shallow, the wall needs doors and a portcullis, and you may have put the wrong flag at the top. In the end, your castle will be bigger, stronger, and more defensible. But the remodeling job is huge.

This is one of the admitted problems you can run into with NaNoWriMo novels. Unless they’re well-planned (and many–or most–of mine are not, and this one was especially not), it’s very easy for the story to run away with the writer. Or maybe the writer’s brain runs away with the story. At any rate, if your building plans are sketchy or non-existent, you usually end up with a castle that needs more than the usual amount of renovation. Sometimes whole rooms are left out. Passages lead nowhere. It might even be on the wrong plot of land. And these are the problems that you don’t even know are there until you start exploring the place with a flashlight and a magnifying glass, taking notes about everything that is wrong. The exploring and note-taking take a long time, and the fixing usually even more.

Which is why it’s so difficult to predict how long such a rewrite/edit will actually take. In the case of this novel, I was down to the last sixty-odd pages of type-ins, when I realized that I had forgotten to address a rather major issue relating to the actual world/setting of the novel and the characters in it. I’m glad that I thought of it on my own instead of having one of my first readers hand it back to me with a note saying “but what about ?” However, it pushes that elusive end-of-the-project goal a little further out of reach again.

I’ll get there. The four thousand words that I’ve added so far have improved the novel immensely, and with luck I’ll continue to make it better. But I hesitate to change that “85%” complete to “90%” just yet.

*The great sandcastle photo is by remoran