Along with the original crew of the Tane Ikai, there are a few other notable characters in One’s Aspect to the Sun. There are a few who turn up briefly in this book but make larger appearances in a later volume (Luta’s brother Lanar, for instance), so I’ll save them for now. Today you’ll meet Maja, Dr. Ndasa, and Luta’s mother, Emmage. 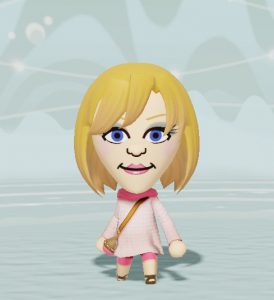 Maja Tacan
Although Maja and Luta are struggling with a lot of old resentments and are mostly estranged at the beginning of One’s Aspect to the Sun, Maja has a considerable presence across the series. Her Mii looks a lot more cheerful than her character does when we first meet her. 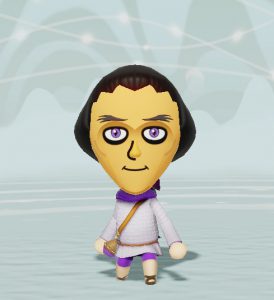 Dr. Yalin Ndasa
The Vilisian doctor was my first “alien challenge” in making Nearspace Miis. I love how he turned out! You can’t see it in this picture, but he does have the single long braid that his character has in the book. Note the classic violet eyes so common in Vilisians. 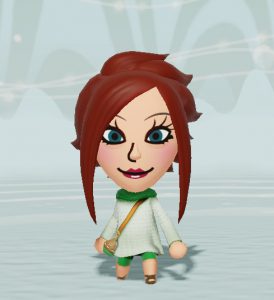 Emmage Mahane
Well, yes, Emmage does look a lot like Luta. Which is in keeping with their character descriptions in the book, not a sign that I was getting lazy with my Miis. ;)

Next post we’re on to Dark Beneath the Moon and some pretty challenging aliens. (But you won’t believe how well they turned out!)