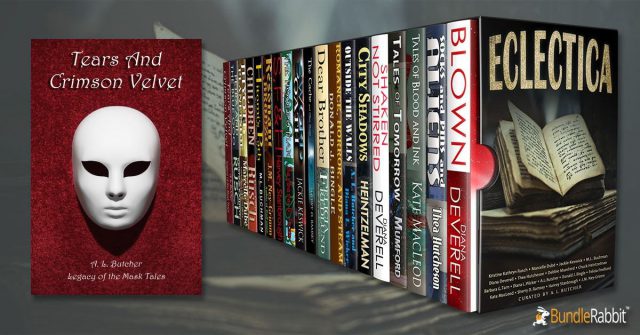 Hi everyone, we’re back with some new interviews this week! Today I’m chatting with Eclectica Bundle author (and curator!), A. L. (Alex) Butcher.

Sherry: Hi Alex, and thanks for stopping by for a chat! To begin, would you tell us a little about the story/book you have in the current bundle?

A. L.: “Tears and Crimson Velvet” is a short historical fiction based on characters from Phantom of the Opera; set in 19th century France the story follows Madam Giry and Erik (the phantom). She first meets him when he is a performer forced to sing and humiliate himself for the paying public in a travelling fair. They then meet again later, and Erik is in a desperate situation. Giry is the first person to show the confused and disfigured young man kindness, and he never forgets it. This is her story, and their story.

Sherry: That sounds like a fascinating exploration. Do you remember what sparked the idea for this story? What was it?

A. L.: I’ve been a Phantom fan since I was 11. My mother took me to see the stage show in London and I was enchanted. The original book, by Gaston Leroux is a masterpiece of tragic horror/mystery. There are dozens of adaptations of the story – some better than others. Madam Giry is an important character in a few, but a rather comical figure in the Leroux original. I wondered what if – what if she had met Erik before? What was she like as a young woman? What made her the lonely widow we meet? That was the basis of the story. I also have another ‘Legacy of the Mask’ Tale featuring Raoul De Chagny set twelve years after the events at the opera house. It’s sad, haunting and lyrical.

Sherry: I love how you’ve spun so much from this one theme. :) Now, imagine you’ve been kidnapped or trapped by a natural disaster. Which of your own characters (from any work) would you want to rescue you? Why?

A. L.: My Archmage Lord Archos. He’s a powerful sorcerer, and handy to have around in a crisis.

Sherry: Yes, I expect he would be! Why do you write short fiction? Love, necessity, marketability, or something else? 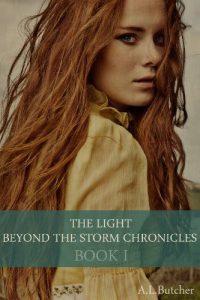 A. L.: I write novels, poetry and short fiction. It depends on the stories wanting to be told. Some start as shorts and grow and some reach their peak as shorts. I like reading short stories, and they are fun to write, but in many ways more challenging than a novel. The author only has a short word count to introduce characters, build or describe the world, and get the adventure done.

Sherry: Do you belong to any writer’s groups or communities? Do you think these types of social interactions are important for writers?

A. L.: Lots! The indie author community is, for the most part, supportive and welcoming. Every author is different, and his or her work is different and many of us don’t have a broad skillset. There are some great writers out their who know nothing about marketing, or networking, for example. Or have the talent but not necessarily the technical skills. Communities and groups can offer support, ideas and teach a new (and experienced) writer some of the skills he or she doesn’t have. Networking is really important – you might have written a great book but if no one knows it’s there then no one will buy it. You may not know the proper genre, or key words, or how to source or make a suitable cover. You may not know that a particular group of readers is really keen on this genre or that.

I’ve made tons of friends, not just people I follow on FB. People I chat to, we share ideas and likes and dislikes, we compare sob stories and successes and we support it other.

Sherry: I have to say I love the collaborative idea behing BundleRabbit and these bundles, and the chance to meet and interact with other writers, as we’re doing now.

Have you had to deal with bad reviews? How do you manage them?

A. L.: Yes. I’d say most writers have at least one bad review. It happens. At the time I was upset – but now I am not that bothered. I have good reviews as well. Not everyone likes my work – and that is fine. I don’t like every book I read either. I may not necessarily agree with what a reviewer says or thinks but arguing over it is NOT going to help, if anything it will make things worse. It happens. Move on.

Sherry: Agreed. Do you think there were early influences as a reader that have guided the stories you create as a writer? What were they?

A. L.: Oh yes. I loved to read, and still do. My father and grandmother would make up stories to tell us, and I think that was a huge influence.

I think CS Lewis – Chronicles of Narnia helped to fuel my love of fantasy, and the classics such as Dracula, Frankenstein and Wuthering Heights gave me the darkness of my own books. Not to mention Phantom – that has been a huge influence on my life – not least a ten-year career working in theatre after I worked on that tour.

Reading to children and story telling is so important. Kids have a vivid imagination and it is great if they are allowed to indulge that.

Sherry: Tell us about your other works, projects, publications, and what’s on the horizon next. This is the shameless self-promotion portion of the interview. ;) 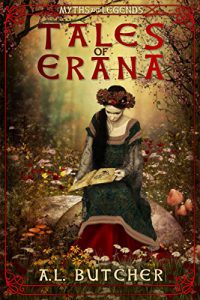 A. L.: Let me see: I have the Light Beyond the Storm Chronicles series (currently three novels and working on a fourth.) These are fantasy/fantasy romance with a touch of erotica (i.e. sexy scenes), they are dark – elves are slaves, and magic is illegal so my female lead who is an elven sorceress is in big trouble. Elves have no rights, women have few rights, mages have no rights. The land of Erana is run under martial law by the feared Order of Witch-Hunters and my gang have to avoid their machinations and heavies, whilst trying to bring some good – albeit beyond the law. It’s a dark world.

I also have several short stories set in Erana – the Tales of Erana series; a collection of short family-friendly fantasy stories; a book of poetry, two Legacy of the Mask Tales, and historical fantasy novellas in Heroika: Dragon Eaters and Lovers in Hell from Perseid Press.

I curate bundles too – so I have work in half a dozen bundles and curator only for a few more.

What is next? I am working on a story for Perseid Press, book 4 of the Chronicles and several short stories.

Sherry: Thanks so much for chatting, Alex! I look forward to reading more of your stories!

Alex is the author of the Light Beyond the Storm Chronicles and the Tales of Erana lyrical fantasy series. She also has several short stories in the fantasy, fantasy romance genres with occasional forays into gothic style horror, including the Legacy of the Mask series. With a background in politics, classical studies, ancient history and myth, her affinities bring an eclectic and unique flavour in her work, mixing reality and dream in alchemical proportions that bring her characters and worlds to life.

She also curates for a number of speculative fiction themed book bundles on BundleRabbit.

Her short novella Outside the Walls, co-written with Diana L. Wicker received a Chill with a Book Reader’s Award in 2017 and The Kitchen Imps won best fantasy for 2018 on NN Light Book Heaven. Alex is also proud to be a writer for Perseid Press where her work features in Heroika: Dragon Eaters; and Lovers in Hell – part of the acclaimed Heroes in Hell series. http://www.theperseidpress.com/

Remember to grab the Eclectica Bundle while you can for stories from all these great authors!