Sherry: Hi Joslyn! Thanks for joining us for this interview. To start, please tell us a little about the story/book you have in the Cat Tales #2 bundle. 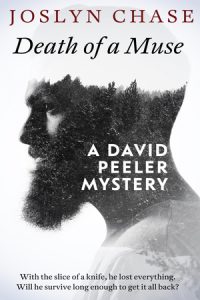 Joslyn: Death of a Muse introduces David Peeler, an up-and-coming sculptor who loses his career, his fiancée, and everything else that matters to him with the slice of a surgeon’s knife. The procedure to remove a small, benign tumor in his frontal lobe leaves him with a TBI, Traumatic Brain Injury, which changes his personality such that he doesn’t know how to live with himself anymore. And doesn’t want to. In a last ditch effort to regain some semblance of his former life, he visits an artist retreat. While there, he becomes involved in a murder investigation and discovers aspects of the new David Peeler that may reignite his spark for life.

Sherry: Sounds intriguing! Do you remember what sparked the idea for Death of a Muse?

Joslyn: The idea for Death of a Muse hit me while I was reading Lisa Cron’s marvelous book, Wired For Story. She was relating how important emotion is in everything we do, how critical it is for making decisions, and she told of a man who underwent surgery to remove a brain tumor and lost a minute piece of his frontal lobe, radically affecting his emotions. Post-surgery, he was unable to make the simplest decisions, because he just didn’t care. He was unable to place values on the different options and therefore found it impossible to choose one over the other. I found this fascinating, and the idea for David Peeler, an artist in a similar situation who has to relearn how to be himself, was born.

Sherry: Why do you write short fiction? Love, necessity, marketability, or something else?

Joslyn: I love short suspense! Ever since I discovered a stack of old Ellery Queen Mystery Magazines in my grandma’s basement when I was just a kid, I’ve been a huge fan of those nugget-sized pieces of pure reading pleasure and been seized with the desire to create that kind of reading experience for others. From a practical standpoint, short stories are quicker to produce and have huge potential for advancing a writer’s career. There’s so much you can do with them—market to magazines, use as reader magnets or bonuses, bundle it up like Cat Tales and team with other authors to reach more readers. 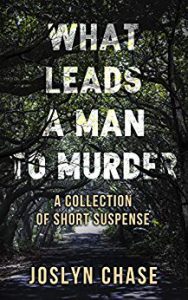 Sherry: Oh, wow, I used to devour those mystery magazines! Their influence definitely shows up in how often I integrate mysteries into other genres. :) But back to you…are you a planner/outliner/architect or a pantser/gardener/discovery writer?

Joslyn: I am definitely an architect, master planner type. I love this part of the writing process and find it to be the most creative and the most fun. This is where I ask myself what if questions and let the story rove all over until it takes shape. Then I outline that shape, scene by scene, so that when it’s time to write, I have a clear objective for each scene and a story that has a good chance of satisfying the reader because I know, in advance, it’s got what it takes. The outline is not a cage, but a structure like a trellis to support my story as it grows. There are still plenty of surprises and flashes of inspiration to be had as the writing progresses.

Sherry: Well, we’re complete opposites in that department. :) But I’m always interested in how other writers work. Do you prefer music, silence, or some other noise in the background when you write?

Joslyn: As a musician, I find it very difficult to work while music of any sort is playing. If there’s music, I’m compelled to follow it, to get lost in the patterns and beauty of it. It takes me to a different place than I need to be for my writing. I prefer quiet, but if there’s a lot of background noise, I like to use the sound of a rainstorm to cover it and let me write effectively.

Sherry: Many writers also put their creativity to use in ways other than writing. Do you consider yourself a “creative person?” What other creative outlets do you have?

I definitely consider myself a creative person. I’m a musician and I write songs, as well as prose and poetry. I also like to write arrangements of other people’s songs, often combining two pieces or using the meter from one piece to create a new version of a different piece.

I’m also creative in the kitchen. I like to cook and bake and make too many things that are way too delicious. I’ve had to curtail my kitchen activities as my metabolism slows with age. While that’s a big bummer in some ways, it gives me more time to write, and that’s good!

Sherry: Tell us about your other works, projects, publications, and what’s on the horizon next. This is the shameless self-promotion portion of the interview. ☺ 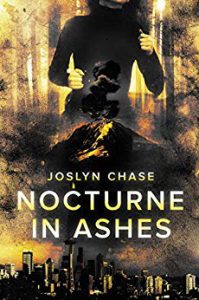 Joslyn: I’m currently working on two projects scheduled for release in 2019. I’m very excited about Steadman’s Blind, which is a paraquel to my thriller, Nocturne In Ashes. In other words, it takes place at the same time and in the same setting, and some of the scenes and characters intertwine between the two stories. Fascinating stuff! In Nocturne, Mt. Rainier erupts, causing all manner of devastation and trapping my heroine, Riley Forte, in a small community stalked by a killer. She teams up with Nate, a homicide detective out of his jurisdiction, who manages to get a message to the local sheriff’s dispatch, but it takes three days for the deputies to arrive. Steadman’s Blind is their story—those two deputies—and it’s packed with action and suspense! It’s set for release on November 19th.

In addition, I’m working on an audio version of The Tower, a romantic suspense set in the aftermath of WWII. Plus, I’ll have a new audio story and eBook which I plan to release exclusively to my reader’s group as bonuses this year—one in June and one as a Christmas present. Sign up to join us and get the goods!

Sherry: Thanks so much for sharing with us, Joslyn! I look forward to reading Death of a Muse.

Joslyn Chase writes suspense fiction, ranging from mysteries to thrillers with an occasional dip into the horror genre. She is a classical pianist, music teacher, and storyteller who loves American History and holds a degree in American Studies. She currently lives in the Pacific Northwest, with her husband, a dog, and at least one child at any given time, but has previously resided in Spain and Germany as well as various locations in the United States. Joslyn keeps a webpage at joslynchase.com, and you can also find her on Facebook and Goodreads, where you can watch a video trailer for Death of a Muse.

And don’t forget to check out Cat Tales #2 while you can!