The Picture Perfect Writer-Blocked and Anguished

Earlier this evening, I came across an article called “Stock Photos of Scientists Reveal That Science is Mostly About Staring.” It was a collection of stock images hashtagged #BadStockPhotosOfMyJob and quite funny. Because yes, most of the stock photos of scientists show them just…staring at various things.

Okay, I get it; it’s difficult to represent the dynamic undertakings of scientific research in still images. However, it did make me wonder how writers and writing get represented in stock images.

It was quite an eye-opener. Apparently, I’m doing this writing thing all wrong. 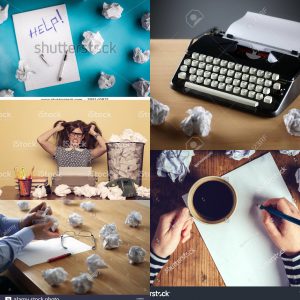 I mean, there’s not a single balled-up piece of paper in my entire office. Not even in the garbage can. I looked everywhere, I swear, and it’s obvious from these photos that balled-up pieces of paper are de rigeur in the writer’s environment. I do have pens and paper, but the thing is—I write mostly everything on the computer, my laptop, or my iPad. I hardly ever scribble ideas on actual paper. It’s better for the environment, but in a way, looking at these photos, it’s like I’m not even trying, right?

The second thing I noticed is that I’m far too happy. I’m not saying that the writing life is all rainbows and fireworks, but for the most part, I feel like it’s a pretty sweet gig. I get to do a job I love. I can work in my pyjamas if I want. Occasionally I get a note from a reader who really liked something I wrote. Most of the time, I’m happy. Wrong again, apparently! 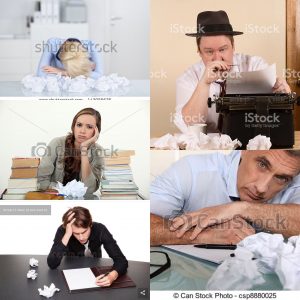 Just look at these people—abject misery. Writing or trying to write is just the worst thing that’s ever happened to them. They’re in the pit of despair. And surrounded by more of those pesky paper balls. I’m starting to think the paper balls are somehow connected to demons. Demons who feast on the souls of writers. Also, not a laptop in sight. I’m thinking technology plays a role in the levels of angst represented here. 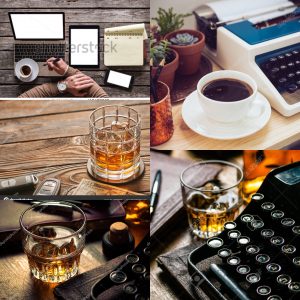 Finally: beverages. Apparently, writer beverages are either coffee or whiskey. Wine-drinking writers, you’re doing it wrong, too. I’m 1 for 2 on this one, because the coffee is a staple. The whiskey, not so much. But look at that image in the upper left. Coffee notwithstanding, this writer is soon to join his miserable colleagues, because that coffee is so going to spill on his laptop. Who would put that there? He also looks like he’s about to dip his pen into the cup, which is also not going to go well.

Thanks to Shutterstock, CanStock, DepositPhotos, Dreamstime, iStockPhoto, and 123rf for the image fun. But I think you guys might have to try a little harder if you want to avoid the #BadStockPhotosOfMyJob attention. :)