See? I promised another Canadian author interview, and here we are! Marcelle Dubé grew up near Montreal, but now lives in the Yukon. Her novels have been published by Carina Press and Falcon Ridge Publishing, and she has published many short stories, most recently in On Spec and Superhero Universe: Tesseracts Nineteen. (Personally, I can highly recommend her Mendenhall Mysteries!) Marcelle also writes under the pen name Emma Faraday. She keeps a website at www.marcellemdube.com/.

SDR: Marcelle, tell us a little about the story you have in the Short Flights bundle. 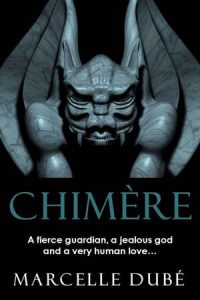 MD: In “Chimère,” our heroine Bittan lives in modern-day Montreal. She is the daughter of the high priestess of an ancient god who expects Bittan’s obedience and love, and has sent a mythological guardian to Montreal to protect her. Now Bittan must choose between the power a dangerous, jealous god offers her, and the very fragile love of a human man. And she must choose quickly, before the god destroys him.

SDR: That sounds fascinating! Now, imagine you’ve been kidnapped or trapped by a natural disaster. Which of your own characters (from any work) would you want to rescue you? Why?

MD: Definitely Kate Williams, Chief of Police of Mendenhall, Manitoba and heroine of my Mendenhall Mystery series. She’s smart, stubborn and quick-witted. If anybody can rescue me, it’s her and her team of intrepid constables.

SDR: Since I’m familiar with Kate, I have to agree she’s a good choice. What’s your current writing project? How do you feel about it right this minute?

MD: Right now, I’m working on Book 2 of the A’lle Chronicles, the first of which—Backli’s Ford—came out in 2012. I am little anxious about finishing it because it’s been so long since Backli’s Ford came out. I have been busy in the interim, of course (5 novels and 16 short stories), but there are so many stories to be told in the A’lle Chronicles world that I may not live long enough to write them all…

SDR: I know you’ve written series characters. What’s their appeal for you? 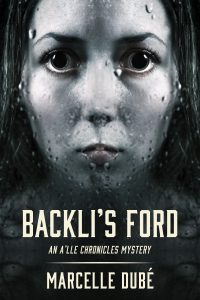 MD: To my utter surprise, I find myself with not one, but two series on the go. Both are mystery series, though one is a police procedural and the other is an alternate history series.

I’m not really a series person, but after I wrote The Shoeless Kid (Mendenhall Mystery #1), with the aforementioned Chief of Police Kate Williams, I found myself wondering what she and her constables were up to now. I liked these people and I wanted to know what was going to happen next. So I wrote The Tuxedoed Man. Then, of course, I was doomed. I’ve just released the fifth in the series, The Forsaken Man.

The second series is The A’lle Chronicles. I can’t lie—I knew exactly what I was getting into when I started the first one, Backli’s Ford. I had so many ideas about the people and events and how they veered off from our timeline… I’m happy to finally be getting back to Constance A’lle and Chief Investigator Desautel.

SDR: Have you had to deal with bad reviews? How do you manage them?

MD: I know most writers say they don’t read their reviews, but that’s not me. I read every single one, good or bad. After all this time, I don’t mind the bad ones. I know not everybody will like my stories, and that’s okay.

MD: I sail off into the darkness every time, hoping I won’t fall off the edge of the world…

SDR: I have to admit, I’ve been heartened during these interviews by how many other authors give this answer… :)

Do you think there were early influences as a reader that have guided the stories you create as a writer? What were they? 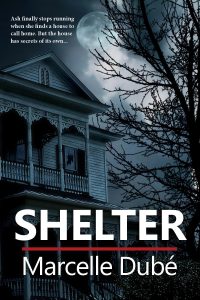 MD: Oh my. I loved the pulp writers: Edgar Rice Burroughs (Tarzan), Lester Dent (Doc Savage), Robert Heinlein (Stranger in a Strange Land, Podkayne of Mars), Robert E. Howard (Conan the Barbarian), C.L. Moore (Jirel of Joiry)… I still love the pulp-style stories and I’m sure that love translates into a lot of my stories.

SDR: Do you think the place where you live (or somewhere you have lived) influences what you write? In what way?

MD: I live in the Yukon and its dramatic landscape and wilderness lend themselves to great fiction. Quite a few of my stories have featured the territory as a character (Obeah, On Her Trail, Ghosts of Morocco, “Jules,” “Going to Liard,” “Root Fire,” “Running Away from Christmas,” “The Man in the Mask,” “A Yukon Christmas,” “Troll Country”).

SDR: And that’s reflected in the tagline on your website, as well… “Writing the North and other fantastic places…” I like that. :)

Do you prefer music, silence, or some other noise in the background when you write? If music, what kind? 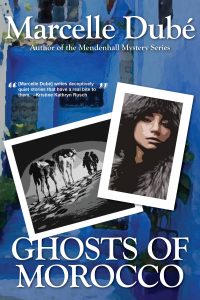 MD: I am so easily distracted that I have to work in silence. I can ignore background sounds like traffic or kids playing outside, but any sound in my writing space demands my attention and takes me away from the story. I could never write to a soundtrack.

SDR:, Well, to finish off, tell us about your other works, projects, publications, and what’s on the horizon next. This is the shameless self-promotion portion of the interview!

MD: My most recent novels are Shelter, set in modern-day Ontario and featuring a young woman who stumbles onto a haunted house while running away from an abusive husband; Ghosts of Morocco, in which our heroine finds herself thrown back into a Moroccan nightmare from her youth when she tries to protect the child of her best friend; and The Forsaken Man, in which Chief of Police Kate Williams finds herself longing for a quiet spring after a long, hard winter. What does she get instead? The theft of valuable bull semen from a local vet and increasingly dangerous vandalism at a construction site. 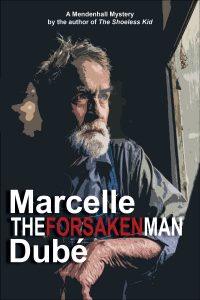 SDR: Thanks so much for stopping by and chatting, Marcelle! And thanks for being part of the bundle.

The Short Flights bundle from BundleRabbit is available now across many online platforms. Along with Marcelle’s story, you’ll find nine more single stories and five full collections in the bundle, enough short fiction to keep you reading for a while! At just $4.99, it’s a real steal, so don’t miss it.