I’ve been pretty active with bundles lately, and a good writing friend asked if I could talk about them a little here. So I’m happy to dish the low-down on bundles as I’ve experienced them.

To start with, book bundles are primarily a marketing tool to draw in readers with a good value deal on multiple books, and from the participating authors’ perspective, introduce one’s works to a new audience. Bundles generally originate with publishers, author collectives, or through bundling sites or platforms. They may also be known as “box sets,” which are essentially the same thing.

One of my first introductions to being included in a box set or bundle was one my publisher, Tyche Books, put together a few years back. It was a space opera box set called Rogues, and (from my perspective anyway) sold well. It included the first book in my Nearspace series, One’s Aspect to the Sun, so would serve as an introduction to this series for new readers, some of whom might go on to buy others in the series. Just the other day I happened upon a review of Rogues I hadn’t seen before, and the reviewer said,  “There were a few great stories (I really liked One’s Aspect to the Sun, for example)” so that kind of made my day! This reader might not have seen my book if it hadn’t been in the set, but they enjoyed it and who knows? They might buy Dark Beneath the Moon and Beyond the Sentinel Stars.

While I’m thinking of it, One’s Aspect to the Sun is currently in a new box set from Tyche, called Shadows and Light; it’s a “first in a series” set, again meant to introduce new readers to a series. And it looks beautiful! 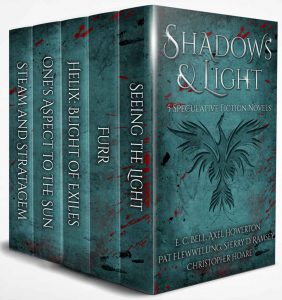 A large part of the thinking behind bundles or box sets is cross-pollination–someone might initially buy this set because of one of the other authors included, but then read my book because it’s there, and become introduced to me as a writer in that way. And hopefully go looking for other things I’ve written.

I’ve also worked with a bundling platform called BundleRabbit. BundleRabbit is the brainchild of Chuck Heintzelman, and provides authors with a place to list works they’re willing to have included in bundles. Authors participating in a bundle share in the revenues generated from that bundle. I curated one of the first BundleRabbit bundles, and have just done a second one, the Short Flights of the Imagination bundle. I love short fiction and I’ve wanted to do a bundle featuring short stories for a while now, and it has finally come together. So the curator decides on a vision for a bundle and searches through available titles to find pieces to include. Authors are invited and may accept or decline. Then when the bundle is finalized, hopefully all the authors will participate in sharing and promoting the bundle out to their social networks; this is where more cross-pollination comes into play as readers learn about other authors from one they already know. BundleRabbit does all the heavy lifting of setting up and distributing the files and downloads, participates in promotion, and collects revenue and pays out royalties.

Of course, to list your work on a site like BundleRabbit, you must have the rights to do so; I wouldn’t list my traditionally published titles there because my publishers look after that marketing and have the right to set prices and oversee distribution. However, for my independent titles, I’m free to do as I wish. And of course I mention my other trad-pub works in the ebook files I use for bundles, so it’s roundabout promotion for those, as well.

I’ve been invited to several bundles, some of which are current right now: Immortals, Weird Fantastic Detective Stories, Gumshoes Redux, and Short Flights, which is on pre-sale now and will release in full on March 15th. It’s good to have a variety of titles available if you’re going to get into bundling, and of course, as with all independent titles, they should be of high quality, with professional covers and blurbs, so that curators can include your work with confidence.

More questions about bundles? Ask in the comments and I’ll do my best to answer. Now if you’re looking for some new material for your ereader, be sure to click some of these links… ;)