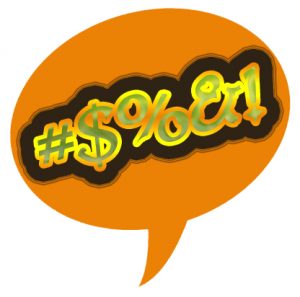 A long, long time ago, over at The Scriptorium, I had a feature page called the Alternative Expletive Project. Here’s how I explained it then:

For many writers, the use of expletives in our fiction writing presents a quandary. Do we go ahead and use one of those infamous “seven words you can’t say on television” (although I think they’ve all been said there by now)? Do we tone down one or more of those words, making the work less likely to offend–but, some would argue, less realistic?

It’s a personal choice that we all must make at some point, when our character smashes a thumb with a hammer, loses everything in the stock market, gets into a huge screaming match or realizes that the spaceship’s life support system has just failed. To swear, or not to swear, that is the question.

For those who’d like to walk the line somewhere between an “R” rating and an unbelievably dull character, The Scriptorium presents the Alternative Expletive Project. Our goal: to offer writers real-life, inoffensive examples of what folks say in times of anger, pain, despair and other emotional extremes.

I asked The Scriptorium’s readers to send me their examples and suggestions, and the response was…edifying, to say the least. So I collated all the responses into one large (partially) alphabetically-sorted list. As responses continued to roll in, I gave up on alphabetizing them. It’s interesting to note that today’s possibly most popular swear-without-really-swearing, “WTF,” did not even make the list at the time.

When The Scriptorium underwent a redesign, that page was overlooked and didn’t make it back onto the new site. So I present the list here, for your browsing and reference pleasure. You never know when it might come in handy–and it’s fun, at any rate. Do you say any of these? Do your characters?