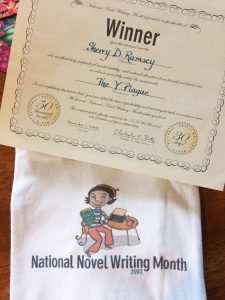 Yup, today we’re going all the way back to the beginning. This was my first year of NaNoWriMo! And yes, in this picture you can see what I expect is a pretty rare artifact–the 2002 t-shirt.

My first NaNo novel was The Y Plague, a story about a future Earth where the male population has been reduced by a very large percentage. No, I did not write this because I hate men. I wrote it because it was an idea that interested me and I wanted to explore it. Here’s the blurb (from before I really understood how to write a good blurb, but someday I’ll write a better one):

In a future where genetic degradation has reduced the male population to only five percent of the total, fertile males are prized as research subjects and breeding partners. There’s unrest, however, as men begin to resent the bonds of society and start to form their own Freemen colonies. The radical X/Alt group wants to see the end of all research aimed at restoring the male genome, and in Rome, the last male Pope uncovers a secret that will either drive him mad or rock the Catholic Church to its foundations.

I had a one-year-old and a six-year-old when I wrote this novel, so it required getting up early in the morning and staying up late at night. I remember pouring up a glass of juice every night so that in the morning, I just had to stumble out to the fridge and retrieve it, sipping as I made my way to my office. Then I pried open my eyelids and tried to get a few hundred words down before the day started. This strategy worked out very well for me, as I found that by the time I got to write again once the kids were in bed, my brain had been working on the next part all day. I wrote over 2k words nineteen days of the month that year, which I think was pretty consistent.

Looking at my spreadsheet from that year, I see that I passed 50k words on the 25th of November! Wow. I was on fire that year. I finished out the month with 58,337 words, and an outline for the final fourteen chapters of the novel. I kept writing until the 3rd of December and reached 59,029 words, but wrote the outline when I realized that although I hadn’t gotten to THE END, I had to turn my attention to the upcoming holidays. I didn’t want to forget where the novel was heading when I picked it up again in January.

I have never written those last chapters. *headdesk*

However, I pulled this novel out last year and began looking at it. I think it’s good. Better than I remember, actually, and perhaps even more relevant in many ways than it was when I started it. It’s very near the top of my list of things to finish. I think it probably needs a new title, since the “plague” is not really a plague and has happened long before the book begins, but I can deal with that.

One thing I’m doing during this retrospective is considering these unfinished novels, what state they are in, and what they need. From this I’m making a to-do list for 2017, so expect to see some of these titles (or replacement ones) popping up over the next while.