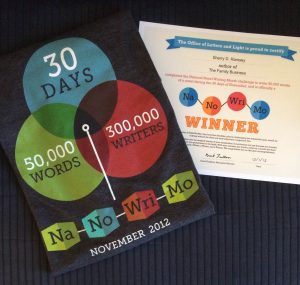 Today we jump ahead to 2012 in the NaNoWriMo Retrospective. This was the year I wrote most of the first draft of The Family Business, which is, sadly, another of the still-unfinished manuscripts waiting for my attention.

I had a lot of fun with this one; it’s a ghost story and a mystery, and it’s definitely one I want to finish. Here’s the blurb:

Stella McKarron is sorry when her Uncle Ambrose dies suddenly, but she doesn’t think it will actually change her life much. They’ve never gotten along terribly well, anyway. So it comes as a surprise to learn that he’s left her his cat (she’s allergic), his car (she doesn’t drive), his private detective agency (she’s a librarian) and his collection of ten thousand books (she’s actually okay with that one). The bigger surprise is yet to come, however, when his ghost appears and tells her that he was murdered, and the first case he wants her to take on is his own… 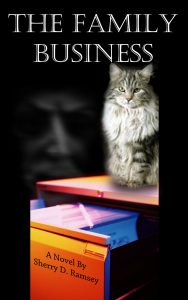 Here’s my hastily throw-together cover mockup; I still like the concept although it could be MUCH better executed.

The November draft came in at just barely 50k, since I was also working on the rewrite of One’s Aspect to the Sun that month. I see from the notes in my spreadsheet that I actually did not have an idea for what to write this year until I actually sat down to do it. I’m trying to remember where the idea eventually came from, but it appears to be lost in the mists of time.

Notably, this was the year I set up my treadmill desk, and this was the first project I wrote at it. I don’t seem to have stats from that month, although I suspect they are around somewhere…I do like obsessive record-keeping from time to time.  We do seem to have had a lot of word wars in the Ramsey household, according to my notes, and some successful write-ins with other Cape Breton Wrimos.

I believe that this one remains unfinished because I made that classic error of trying to write a mystery without enough advance planning. Other genres can work out okay with the “gardening” approach, but mysteries require more of the “architect” thinking. Or as I once said in a radio interview, “When it comes time to lay down a clue, you’d better have a clue.”

Someday soon I’ll pull this one out and see what it needs. It’s  fun tale with some quirky characters and deserves to play out to “The End.”