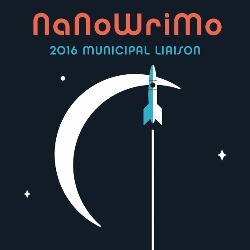 Yes, 2016 marks the 15th year I’m participating in the wonderful creative blast of National Novel Writing Month. I thought it would be fun, as the month progresses, to look back at the things I’ve written, the data I’ve kept, and, even more important, the t-shirts and other nano-merch I’ve acquired over the years. So sit back, pour up a celebratory glass of your favourite liquid for toasting, and enjoy this little trip through time and word counts.

I’m doing this in no particular order, so today I randomly picked 2008 (because that’s the t-shirt I’m wearing today). 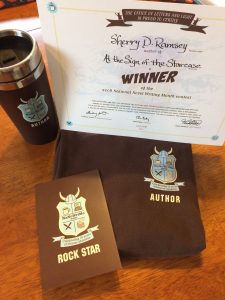 This was the 10-year anniversary of NaNoWriMo itself, and the brown baseball-style tee boasts “NaNoWriMo” and a large number “10” on the back. This is one of my all-time fav NaNo t-shirts. That was the year I wrote At the Sign of the Starcase, and yes, that’s STAR CASE, not a typo. This was a middle-grade to young adult story, and I know I wrote it specifically trying to incorporate many of the elements my daughter enjoyed in the books she was reading at the time. Here’s the blurb:

In the five years since Maddie’s father disappeared, she and her family have struggled to go on with some semblance of a normal life. That life is shattered by the arrival of Neb, a vaguely rabbit-like creature who turns up in Maddie’s room one night, pleading for her help in finding a powerful book called the Cyclopedia and telling her that her father is still alive—but trapped in an alternate world. There’s no question that Maddie will try to help Neb and hope that by doing so she’ll be able to rescue her father. But keeping the rest of her family safe grows increasingly difficult once she finds out that there are others from that world who want the Cyclopedia too…and they don’t care what they have to do to get it.

Looking up my tracking spreadsheet from that year, I see that I finished up at 50,699 words. Some selected comments from the daily “notes” section of the spreadsheet: “Still no idea what I’m doing with this story, but at least it’s started,” “I hate that message that says, at this rate, you won’t finish on time,” “bleh,” and on a more positive note, “Woohoo, I’m getting so many great ideas in the last 24 hours!”

Unfortunately, all those great ideas did not lead to a finished first draft of Starcase, and I didn’t get to type “The End,” which is always my ultimate goal during NaNoWriMo. I always get the 50k, but that goal is more elusive. My daughter is no longer a middle grade reader, but I’m sure if I ever finish Starcase she will read it anyway just to be nice.

We launched our first Third Person Press title, Undercurrents, during that November, so I think that contributed to my struggle with this manuscript. However, I still like it and think it has potential, so it remains on my TBF (to-be-finished) list.