Okay, the Friday Desk Report is a wee bit late. But it was a good writing week! I finished the first draft of a new short story, did some solid work on the novel draft, and worked on an old, unfinished short story that is finally sorting itself out. I also imported a mostly-finished novel draft into Scrivener for some much-needed attention when I need a break from other projects. I almost doubled my word count from the previous week, which is making me very happy indeed. 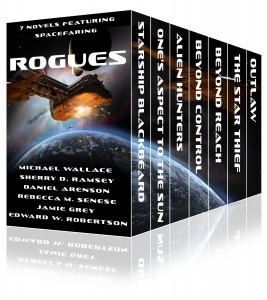 Another thing that’s making me very happy this week is this: the Rogues bundle is out! (If you’re in Canada, use this link.) This bundle of seven novels is selling for just 99 cents while the promotion lasts, so you don’t want to miss out. I’ve downloaded it to my Kindle already and am anxious to start reading. Some of these books start series, so it’s a great chance to discover a new sci-fi love affair. My contribution is the first Nearspace novel, One’s Aspect to the Sun, which starts the series but can also stand alone. Be sure to click over and check out this great deal!

I didn’t miss a day at my treadmill desk last week; I usually start my walking-and-writing routine by doing my words at 750words.com. Think “morning pages” stored online, and you’ve got the idea. I wrote there every day during February and so far every day in March. Sometimes it’s journaling, sometimes brainstorming or working out story problems, sometimes blog posts, and sometimes I actually do a portion of the day’s writing there. I like the regularity of writing there, combined with the freedom to write whatever I feel like writing. The longest streak I’ve ever had writing there was 46 days, and if I can keep it up this week without missing a day, I’ll break that. Guess I’ll have to report on that possibility next Friday.

The other new thin 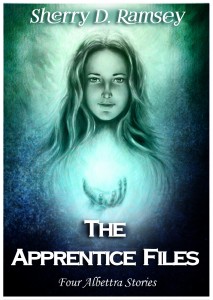 g to report this week is this little goodie, available now on Kobo and Kindle. The Apprentice Files collects four stories with a shared main character: Albettra, the young wizard’s apprentice. These stories can be found in my collection, To Unimagined Shores, so if you already have that, you have these. But for those who don’t, this is a nice little sampler at a good price. Suitable for readers from middle grade and up, these light-hearted stories follow Albettra as she deals with her absent-minded and sometimes crotchety mentor; solves a murder; is pulled into a magebattle, and contends with a halfhigh stalker. This ebook was originally a Kickstarter perk, but now it’s flying on its own.

Things I researched this week: