Another week when I was not at my desk very much–it was school book fair week here, so I spent a fair bit of time organizing and manning that. We had a good week and will be putting a lot of new books into the library as a result. The other payoff is seeing the students get so excited about books. Not to mention dropping a certain amount of my own money there…but we won’t talk about that.

When I was at my desk, I was getting files ready for a bundle that will drop next month–it includes a new story from what I like to think of as “the Nearspace files.” That is, it’s set in the Nearspace universe, but prior to the novels. So it gives a little glimpse into the history of Nearspace, while telling a story that stands in its own. You might already have found the other Nearspace stories I have here on the site, but this novella is something new. I’ll post all the details here when the bundle is ready to go, but I’ll just say that my story will be in some exciting company! Oh, all right–I’ll give you a sneak peek at the cover, as well: 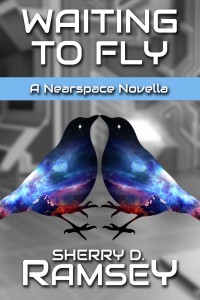 …do you like it? Probably in next Friday’s report (or sooner!) I’ll tell you what the story’s about.

So between editing the story, tweaking the cover, setting up the ebook formats, and miscellaneous other related tasks…that was the week. Add in meetings on three of the five weeknights, and it’s no wonder this isn’t a long report!

I do have one other piece of news, though, and it’s that One’s Aspect to the Sun will be part of a new Space Opera box set, also coming in March. Again, I’ll post all details and links as I have them. This is going to be a great deal, so you won’t want to miss out on it!

And I think that’s the report.