A Bird in the Hand

So, at the same time the Kickstarter for my book with a bird in the title (The Seventh Crow) is running, I had the opportunity to help out a little bird in trouble. 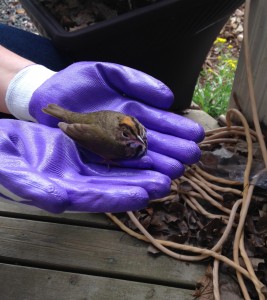 Around 8 o’clock this morning, my daughter and I heard a thump on the front of the house. It took only a moment to spot a couple of downy feathers stuck to the glass and I knew what had happened–a bird had flown against the window over our front door. This is a fairly rare occurrence as the door and window are inset from the front of the house.

I checked the front step right away and saw the little creature in pile of leaves. My first impression was bad–its head seemed twisted and it was breathing heavily. I fetched some garden gloves and went out to have a closer look. When I gently picked it up, it looked left and right and although it was content to sit in my hands, it seemed overall okay, probably just stunned from the impact.

Well, I didn’t want to leave the little guy prey to the occasional cat who strolls through the neighborhood, so we quickly improvised a little shelter in an empty clementine box and set it in an elevated spot near the back door. I figured if it recovered quickly, it would slip out from underneath the mesh easily. 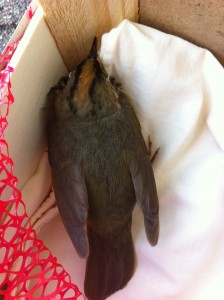 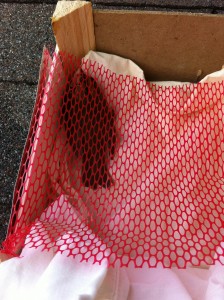 Forty-five minutes later it hadn’t moved much, although it still opened its eyes if I gently drew the mesh back. At this point I wasn’t too confident of its recovery, since that seemed a long time to still be stunned. However, I decided that whether it could recover or not, it was safe and comfortable and not being attacked by any predators. I continued to check on it periodically through the morning and would find it sleeping, but alert if I pulled back the mesh. 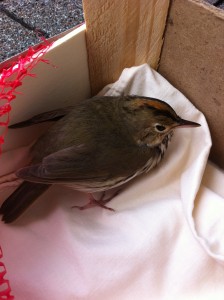 It would be in just this position, but open its eyes when I moved the mesh covering. It wasn’t at all visibly distressed by my presence. Maybe it knew I was trying to help!

And then when I checked at noon, I found this. Looking much perkier! 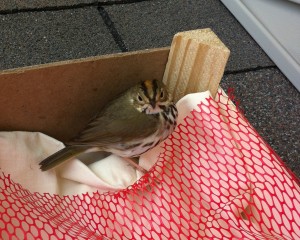 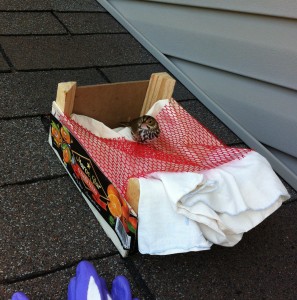 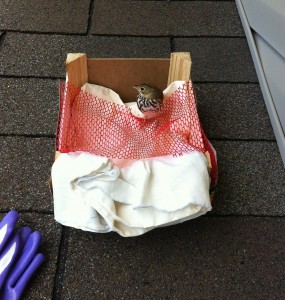 …and then a minute later he hopped out of the box, took a couple of hops, and flew away, across the yard to land in a tree. I guess he just needed a good nap in a safe spot!

Now, my question is, what kind of bird was he? My mother’s bird guide offered a couple of suggestions but none of them looked quite right. If you know or think you know, leave me a comment!