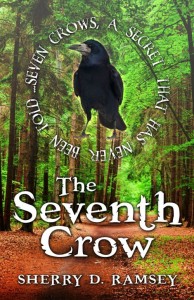 I’m excited today to reveal the cover for my forthcoming middle-grade fantasy/adventure novel, The Seventh Crow. It’s coming this summer from Dreaming Robot Press and we’ve been working hard on it over the past few months.

The crow on the cover? That’s Traveller, the crow from the title. When we first started discussing cover ideas, we went hunting for an image that captured this character, and we found him! See those intelligent eyes, that proud bearing, the impression that he’s just about to speak–

But I don’t want to give too much away.

What’s the book about? (I hear you asking…)

When you can’t remember most of your life, you’d better be prepared for anything. The day a talking crow meets her on the way home from school, fourteen-year-old Rosinda is plunged into a forgotten world filled with startling revelations: magic ability flows in her veins, she’s most comfortable with a sword in her hand, and the responsibility for finding a missing prince rests solely with her.

While dark forces hover in the background and four forgotten war gods from Earth’s past plot to reclaim long-lost power, Rosinda struggles with waves of slowly-returning memories as she searches for clues about her past and the true identity of her family; a search that takes her back and forth between two worlds. In a race against time to recover her memory, find the prince, and rescue her loved ones, Rosinda has only her friend Jerrell and an unusual trio of animals as companions. And as the gods prepare to bring her world to war, Rosinda is unaware that the shadow of betrayal lurks within one whom she trusts the most…

Dreaming Robot will be running a Kickstarter campaign to gather pre-orders, with some pretty sweet perks–like prints of illustrations from the book! Stay tuned and I’ll share full details of the campaign when it goes live.