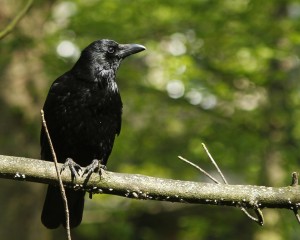 I’m so pleased to officially report that my YA fantasy novel The Seventh Crow will be published by Dreaming Robot Press, with an expected release date sometime in 2015.

I wrote the first draft of The Seventh Crow as my NaNoWriMo project in 2005. It’s been through several drafts since then, growing and maturing (I hope!) with every one. No, I would not say that I’ve “been working on this novel for ten years”! Novel revision seems to be a very on-again, off-again kind of thing for me. If we condensed down the time that I actually worked on it, it would fit into a ridiculously shorter period of time. But sometimes that in-between time is important for the book, and for the writer. In any event, I’m very excited that the novel has found a home!

When you can’t remember most of your life, you’d better be prepared for anything. The day a talking crow meets her on the way home from school, fourteen-year-old Rosinda is plunged into a forgotten world filled with startling revelations: magic ability flows in her veins, she’s most comfortable with a sword in her hand, and the responsibility for finding a missing prince rests solely with her.

While dark forces hover in the background and four forgotten war gods from Earth’s past plot to reclaim long-lost power, Rosinda struggles with waves of slowly-returning memories as she searches for clues about her past and the true identity of her family; a search that takes her back and forth between two worlds. In a race against time to recover her memory, find the prince, and rescue her loved ones, Rosinda has only her friend Jerrell and an unusual trio of animals as companions. And as the gods prepare to bring her world to war, Rosinda is unaware that the shadow of betrayal lurks within one whom she trusts the most…