Today on the blog I’m starting what I hope will be an interesting series of interviews with other authors. First up is D. Emery Bunn. Emery is an author, editor, and engineer, though his pile of interests keeps on getting larger. He got his start in writing thanks to National Novel Writing Month, and is an avid supporter of free culture, the power of writing, and the creative arts. Darkness Concealed is his first novel, but he will be working on the sequel and a cyberpunk short story collection. He lives at his home in Clovis, New Mexico. 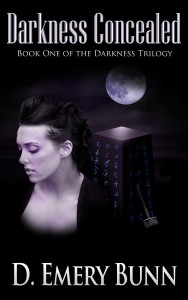 Sherry: Hi Emery! Your dark fantasy novel, Darkness Concealed, releases soon. Can you tell us, first, a little about the book and what it’s about?

D. Emery Bunn: Darkness Concealed is a dark fantasy/mystery, with elements of horror, both psychological and physical, sprinkled throughout. It’s a story that feels dark, yet remains a hopeful vibe. And I could quote the synopsis, but what’s the fun in that?

The world suffers an apocalypse that it calls the Darkening. Well-named considering that the dawn doesn’t come, and the moon and stars bail out, too. In their place is a numberless horde of monsters, each of them more than happy to murder everyone they find, and tear civilization to shreds. Few survive the Darkening, but every other day for 149 years is peaceful and safe.

Nobody knows why the Darkening happens, and people have long since given up trying to find out when four strangers end up bound to each other by chance events. The strangers aim for the impossible: answering that “why”, no matter what it takes. And what it takes is more than they thought they’d ever be willing to give.

Sherry: It certainly sounds intriguing! Now, most writers–as readers–have a lot a influences over time. Who were three of your favorite authors when you were younger? What about now?

Emery: I started on “older” books at a fairly young age. I read Lord of the Rings, Dune, and the Foundation Trilogy at age 13. And in a lot of ways, J. R. R. Tolkien, Frank Herbert, and Isaac Asimov are some of the greatest influences. Tolkien for his world-building, Herbert for his philosophical depth, and Asimov for his ability to make everything relate to everything else.

More recently, I’ve also been entranced by the door-stopping work of Neal Stephenson. I’ve read three of his works, including the titanic Baroque Cycle, and still I want to read more. I love how he can go off on a seemingly random tangent, and still take you with him, coming back to the plot at another time that works for him and me. I don’t have anywhere near the confidence to do such a strategy, but it is intriguing.

Sherry: Although writing is usually a solitary craft, most of us have a “support system” of family, friends, and writing groups or colleagues. Who are your biggest supporters?

Emery: I have supporters everywhere. As crazy as it sounds, the people at my work are mind-blown that I’m writing and releasing a book. Every single one says they want to read it.

I’ve also got a large (and growing) support network on Twitter. The vast majority of my publicity push for Darkness Concealed was drawn by asking the people I knew best on Twitter if they’d be willing to help me out. I love interacting with everyone, and offering my own support in one form or another in return.

Finally, my family is supportive, though from a distance. I live on the other side of the country from them, so I don’t draw on them to help me keep writing as much as I would otherwise.

Sherry: That’s wonderful! So let’s talk about the publishing side of things for a moment. Writers have a lot of options today–what made you decide to go the “indie” route? What did you do to prepare yourself to jump into the process of indie publishing?

Emery: I have a very unique view on copyright: I loathe it. I decided early on that anything I ever release will be available, full text, as a free PDF the same day on my site. And that decision limits me to exactly one option: go indie and release it myself.

But beyond that, I love what independent represents, and what it enables. You can market yourself, your books, and your style of writing in any way you want. You can aim for whatever goals make sense to you. Myself, I’m not really worried about making enough to replace my day job (which I do like a good deal), but a little bit of extra money a month would be awesome.

And in no way does my goal limit any one else’s. Going indie can mean anything that you want it to, and I love that.

Sherry: And you’re in this for the long haul. I understand Darkness Concealed is the first book in a series…do you have a schedule in mind for the subsequent books to come out?

Emery: I can’t speak for the third book, but the sequel I’m tentatively planning to have out around July 2015. The first draft will be my NaNoWriMo 2014 project in November, the second draft will be January/February, third draft April/May, final editing late June. 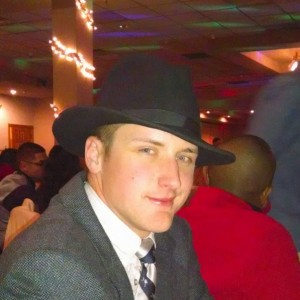 Sherry: We’ll be NaNoWriMo pals, then. ;) What else are you working on? Any other current projects?

Emery: During October I want to finish the second draft (and maybe third, we’ll see) of a novella called Nikolay. It’s set in my cyberpunk dystopia/utopia setting Normalization. Everyone is required to be mentally and physically “normal”, and the technology exists to make it happen in both directions (dampening, or enhancing). In return, life is very, very easy-going.

Some people don’t like that, and deliberately break the law by disabling their cybernetic dampening and installing enhancements instead. They live a shadow life, but they get to reach whatever potential they can manage without getting caught and shipped to the asteroid belt. Nikolay is one such person.

Emery: Write a story you want to read. I did that, and no matter what feedback Darkness Concealed receives I will be happy with it. I’m mentally immune to the inevitable 1-star reviews.

For new writers, this is a long, hard road that there is no shortcut on. It might feel like a slog at points, but trust me when I say that the journey is just as fun as the result.

Sherry: Thanks, Emery! D. Emery Bunn’s novel Darkness Concealed releases on September 23rd, 2014. You can find out much more about the novel, Emery, and publication updates at his website, http://www.demerybunn.com. You can also catch up with him on Twitter @demerybunn.

Have a new project you’d like to talk about here? Let me know through the contact page!