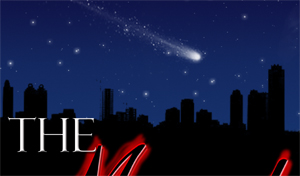 I promised some more details about The Murder Prophet, so here’s what the book is about and a few other tidbits:

Kit Stablefield is a detective with a secret and a crush on a guy she knows only online, in a future where magic is a part of everyday life. But when millionaire Aleshu Coro walks into the offices of Darcko and Sadatake with a message from the Murder Prophet and fourteen days to live, everything changes.

Suddenly Kit is questioning the decisions of her past, trying to find out if the man she loves is, in fact, a man, and hunting for a murderer and a mysterious seer. With her eighty-six-year-old grandmother insisting on helping out, and a sentient goose who simply won’t stop pestering her to watch his “killer” video game moves, Kit has more than her hands full as she races against the clock to prevent Coro’s murder…and possibly her own.

The Murder Prophet is a little hard to categorize. I’m calling it urban fantasy because of the existence of magic, but it doesn’t have vampires, werewolves, fairies or any of the other paranormal elements that seem de rigeur in urban fantasy lately. Also, it’s a mystery, and takes place at least in part in the virtual world of the Netz. See my problem?

But urban fantasy/mystery covers it better than anything else, so that’s what we’ll go with, okay?

Watch for the cover and contest on Friday!