“A is for Apocalypse” Cover Reveal

Today I’m pleased to be one of the blog hosts of the cover reveal for A is for Apocalypse. I love the idea of this anthology (and the idea of the series, of which this anthology is the first title). Would I want to edit it? Heck, no! I stand in awe of editor Rhonda Parrish for taking on this Herculean task.

So what is this task? I hear you asking. Well, in a nutshell:

What do you get when you take twenty-six amazing writers, randomly assign them a letter of the alphabet and give them complete artistic freedom within a theme?

A is for Apocalypse

What’s so Herculean about that? you’re asking now. Sure, twenty-six stories is a hefty anthology to edit, but longer anthologies have been done before.

Well, the rumour (and I believe it’s quite true) is that Ms. Parrish plans to edit an anthology for each letter of the alphabet, each with a new theme, and each containing twenty-six stories. So that’s, um…*gets out calculator, pokes in numbers, scratches head, pokes in numbers again*…that’s six hundred and seventy-six stories for the series. Phew. Having edited a mere sixty-two stories myself (and co-edited, at that), I can appreciate the enormity of the undertaking.

Well, come on, where’s the cover?

We’re getting there. First, you might like to read the answers to this question, posed by Rhonda to some of her writers:

In choosing a theme for this, the first of a series of anthologies, I considered and rejected a great many “A” words. Tell us about your favourite word that begins with the letter A.

Alexis A. Hunter – As an author — ‘acceptance’ has a beautiful ring to it. As a sci-fi writer — ‘apex’ is particularly engaging. In general — ‘angel’ is one of my favorite words, because they’re one of my favorite ‘creature types’ to play with in stories. Plus I have a thing for wings and feathers.

Damien Angelica Walters – My favourite word that begins with the letter A is anathema. It rolls off the tongue like a whisper, hiding its dark meaning in pretty syllables.

Simon Kewin – My favourite A word is (possibly) Archaeopteryx. I love the shape of the word. It’s exotic and fantastical and ungainly all at the same time – a little like the creature itself. It derives from the Greek archaeo (ancient) and pterux (wing). So, “Ancient Wing”. Archaeopteryx is a lovely illustration of the forces of evolution in progress; it’s a snapshot of a species in the process of changing from dinosaur ancestor to modern avian descendent. Here was a creature with a bony tail and teeth and feathers. And claws on its wings. I’d love to have seen one…

C.S. MacCath – My favourite ‘A’ word is ‘atonement’, because unlike ‘forgiveness’, it places the onus for righting a wrong where it belongs; upon the head of the person who committed it. If we were socialized to atone as much as we are already socialized to forgive, we might learn to be more careful with one another.

Okay, okay, very interesting. Now can we see the cover?

Oh, all right. I’ve made you wait long enough. We writers know the value of a good bout of anticipation, you know. But here it is! (You can click it to see it full-size.) 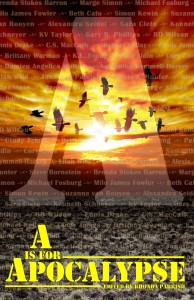 I think A is for Amazingly Cool. :)

Here’s a little more about the book:

“In A is for Apocalypse, the world ends in both fire and ice–and by asteroid, flood, virus, symphony, immortality, the hands of our vampire overlords, and crowdfunding. A stellar group of authors explores over two dozen of the bangs and whispers that might someday take us all out. Often bleak, sometimes hopeful, always thoughtful, if A is for Apocalypse is as prescient as it is entertaining, we’re in for quite a ride.” – Amanda C. Davis, author of The Lair of the Twelve Princesses

“Editor Rhonda Parrish gives us apocalyptic fiction at its finest. There’s not a whimper to be heard amongst these twenty-six End of the World stories. A wonderful collection.” -Deborah Walker, Nature Futures author.

Hey, what about that giveaway?

I’m giving away three ARC copies of A is for Apocalypse (tour-wide). These are physical copies but I am willing to ship them to anywhere in the world. The Rafflecopter draw will run from May 12th to May 19th. On May 20th I will choose three winners and email them in order to get their shipping address. Anyone who doesn’t respond by May 27th will forfeit their prize and I will choose a new winner to receive it.

The Rafflecopter Giveaway is here. So go, enter! What are you doing still hanging around here?