The Writer’s Ladder of Success 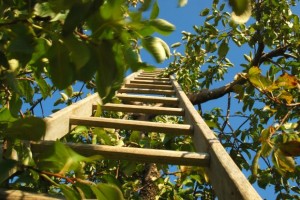 A long time ago, in 2001, when ebooks were barely a “thing” yet and the only format for them was .pdf (ancient history, I know), I self-published an ebook for writers. It was called The New Writer’s Guide to Just About Everything and yes, it’s still around, although it’s sorely in need of an update and a new edition. Another thing on my too-long to-do list. But I digress.

Today I am thinking about a piece in that ebook, titled “The Writer’s Ladder of Success.” In it, I talked about how some new writers think their first sale is the top rung of that ladder, but in reality, that’s only a few steps up. Writing, I said, is the first rung. Finishing is the second. Submitting is the third. You may be stuck on that rung of the ladder for a while before you can climb up to the next one, which is making a sale. That analogy still holds true, I think.

Then, I said, you climb back down and start climbing all over again, writing, finishing, submitting. I think now, with the wisdom and experience of my years of writing (stop laughing!) I’d look at it differently. I think instead of climbing back down, I’d say we can look at it one of two ways: either we go sideways onto another ladder and start climbing from there, or the ladder we started on just keeps going, stretching up into the distance ahead of us. Either way, we’re not starting from scratch; we’re building on what we’ve already accomplished in order to climb to greater heights. Some might find that long, long ladder too daunting to look up at, and like the idea of shorter ones that lead to another, so either way works.

And either view is far more encouraging than feeling like you’re starting every piece from scratch. Of course that’s true in a way, since each writing project is new and comes with its own unique challenges. But we always have the comfortable cushion of our past accomplishments to buoy us up as we tackle the new.

There’s a saying that a writer is only as good as his or her last book. It’s true that we’re often judged that way–and we have to keep our fans happy or we’ll lose them. That’s a lot of pressure, though. I think we’re much more likely to succeed if we continue to feel good about our past successes–and not lose sight of that part of the ladder we’ve already climbed, stretching away below us. One bad song doesn’t make a failed musician; one strikeout doesn’t make a failed baseball player. Why do we hold ourselves as writers to a stricter standard? Why do critics and readers? I’m not really sure.

I closed out that section of the ebook by saying, “…you were a writer from the time you reached that first rung. Don’t let anyone tell you the ladder is not yours to climb.” I think that’s still good advice. I don’t think I’ll change that, should I ever get around to producing a second edition of The New Writer’s Guide.

Keep writing. Keep climbing. Build on what came before. Good advice, and advice I have to keep reminding myself of as I tackle a new project and a new deadline. Because frankly, I like the view from up here.

The Knee-Bone's Connected to the Brain-Bone
Review: A Fatal Grace