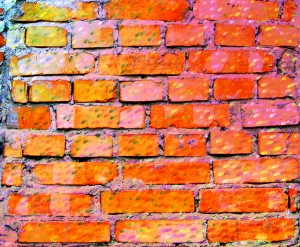 Even a pretty wall is still a wall

“Love writer’s bock? Come on!” you’re saying. There cannot be even a handful of reasons to love writer’s block, let alone eleven. Well, let’s see what we can come up with.

1. Being blocked is often a clue. A clue to the fact that *something* has gone wrong with your manuscript. It’s often your brain telling you, hey, something is wrong here, and I’m not letting you keep going until you figure out what it is and fix it. Listen to your brain. Sometimes it’s the smart one.

2. Being blocked is an opportunity to change gears. If you’re stuck on one project, you can sometimes get unstuck by going off and working on something else for a while. Concentrating your efforts elsewhere allows your subconscious to mull over the problem with your stuck project without the pressure. And: bonus! You’ve made progress on something else.

3. Being blocked can result in a really clean house. Or garage, or desk, or closet. In other words, go do something else productive that isn’t writing. Again, it can lift you out of the rut of worrying at the problem and let your subconscious work at it.

4. Being blocked offers a great time to do research. If you can’t move ahead in the story, use your time productively by working on something associated with the story, that isn’t actually writing it. Sometimes looking at photos or floor plans, reading up on time periods or settings, or working out how the murderer actually did it can be the key to getting you unstuck, and as a bonus, you have your research done.

5. Being blocked is a great excuse to get some exercise. Go for a walk, take a hike, sweat it out at the gym instead of staring at the blank page or screen. You’ll feel better even if you don’t get unstuck, but often the rush of endorphins lets new ideas rush in, too.

6. Being blocked makes you try new things. Ask some writer friends how they get unblocked, and you’ll likely get a lot of different suggestions for things you’ve never tried. Even if you don’t expect them to work, take them for a spin. You never know when you’ll try something that will become part of your regular writing arsenal in the future.

7. Being blocked can improve your social life. Been shunning your friends and family while you struggle with this manuscript? Walk away from it and have a party, go out to dinner, or see a movie. Any change of pace can get you unstuck, and you can reconnect with people at the same time. People, you know? Those folks we base our characters on? It’s good to interact with them once in a while.

8. Being blocked is a great excuse to read something new. Forget your own characters’ problems and get immersed in some other writer’s world for a little while. Chances are, they struggled with their story, too, but in the end they overcame their pitfalls. Besides being enjoyable, it’s a little reminder that you can, too.

9. Being blocked is an opportunity to do something else creative. Most writers I know are creative in other ways, too. Turn your left-brain on to something else it can sink its teeth into. Draw, paint, sew, craft, take photos, do woodworking–whatever is your thing. Any creative efforts can prime the pump for your writing.

10. Being blocked forces you to try harder. So you’ve realized that there’s a problem with the manuscript and you don’t know how to fix it? Now is the time to level up as a writer. Read some books or articles that might help, confer with writer friends, draw charts, make index cards, brainstorm a mind map. You’re a writer, dammit. Keep trying new things until you hit the one that works.

11. Being blocked is a chance to start over. Maybe your manuscript has gone off the rails so badly that there’s just no fixing it. While this is a drastic response, sometimes you just have to ditch the whole thing and start again. Save this for your last-ditch effort to break the block.

See? Eleven reasons to love writer’s block, not hate it. Next time it comes around to visit, don’t despair. Use one or more of these ideas to make it actually work for you.