Eleven Reasons to Talk to Your Characters 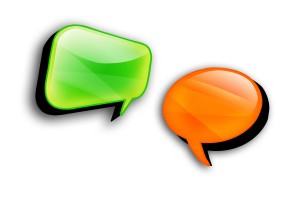 My husband hates it when I talk about my characters as if they are autonomous beings–when they surprise me, or won’t seem to do or act the way that I want. He can’t quite get his head around that aspect of the writing life–and I realize that not all writers feel this way, either. Now, intellectually, I know that I am in control of what these imaginary beings do, say, and feel. But it doesn’t always feel that way.

That’s why I think it’s important for us as writers to spend a little bit of time “talking” to our characters. Getting to know them. Because although they are imaginary beings, they are also, on some level, little windows into our own psyches or the psyches of people we know, and the better we understand them, the more they will come across as real to our readers. You can talk to your characters in many different ways: have a mental conversation with them, write out a bit of dialogue between the two of you, take an online personality test and answer it the way your character would, write a journal entry for them, interview them as if you were writing for a magazine or news story. Or come up with your own methods. (However, you may not want to let your significant other catch you talking to your characters out loud.)

Why do these exercises? Here are 11 reasons:

1. If the character is real to you, they’re more likely to feel real to your readers.

2. Your character has to have believable motivations for what they say and do. Let them tell you what those motivations are.

3. Talking with your character helps you find that character’s voice, so they’ll sound consistent throughout the story.

4. The more you know about your character’s secrets, the more you’ll understand how they impact him or her. And what he or she will do to protect them.

5. Sometimes you character’s priorities will not match what you think they should be. Give your character a chance to explain this to you.

6. “Talking” to your characters can break down your own mental barriers (like feeling stuck in a story)–giving your characters a voice and control can allow you to let them “take over” for a while and sidestep that sticky point where you don’t know what to write.

7. Even if you think you’ve worked up a thorough background for your character, you never know what telling detail will insert itself or come to light when you give the character a little free rein.

8. Telling your character why something has to happen to them and how you think they’ll react can open new plot doors and windows–especially if they want to argue the point with you.

9. If you treat your character as a separate entity, there’s less chance they’ll just end up sounding like you.

10. It’s better to know about your character’s long-lost brother at the beginning of the story instead of having them spring it on you halfway through.

11. The better you know your characters, the less likely you are to become blocked as you find your way along the path of your story.