What D&D Character Are You? 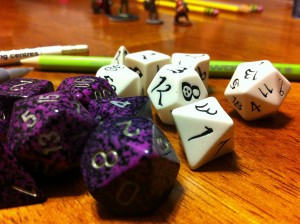 I came across this quiz via Facebook today and, well, I had to take it. 129 questions later, here’s the result:

I Am A: Neutral Good Human Druid (6th Level)

Alignment:
Neutral Good A neutral good character does the best that a good person can do. He is devoted to helping others. He works with kings and magistrates but does not feel beholden to them. Neutral good is the best alignment you can be because it means doing what is good without bias for or against order. However, neutral good can be a dangerous alignment when it advances mediocrity by limiting the actions of the truly capable.

Race:
Humans are the most adaptable of the common races. Short generations and a penchant for migration and conquest have made them physically diverse as well. Humans are often unorthodox in their dress, sporting unusual hairstyles, fanciful clothes, tattoos, and the like.

Class:
Druids gain power not by ruling nature but by being at one with it. They hate the unnatural, including aberrations or undead, and destroy them where possible. Druids receive divine spells from nature, not the gods, and can gain an array of powers as they gain experience, including the ability to take the shapes of animals. The weapons and armor of a druid are restricted by their traditional oaths, not simply training. A druid’s Wisdom score should be high, as this determines the maximum spell level that they can cast.

Well, that’s freakishly accurate. I’ve played a Druid the majority of times I’ve created a character in my 30+ years of playing.

A look at the detailed results is even more interesting:

I guess I understand my place in the (D&D) universe. :)

Find out What Kind of Dungeons and Dragons Character Would You Be?, courtesy of Easydamus (e-mail)

Review: The Sweetness at the Bottom of the Pie
Review: Scarlet