The Awesome and Terrible Power of Words 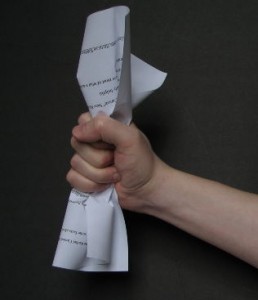 As a writer, I’m very aware of the power of words. I hope to write things that harness and use that power, whether I want to make my readers laugh, cry, think, feel–I know that with the right words, I can make any of that happen. I work hard to find those right words, even when they seem unattainable.

I know that it takes hard work to arrive at the “right” words. We write, and then we write again, and then we write again, hoping that each draft brings us closer to the goal. Even then we rewrite, edit, tweak, and sometimes cut out large swathes of the words we had previously worked so hard on, that seemed so right at the time, and replace them with something that works better now. And maybe we finally arrive at the point where we think it’s “right,” and others agree, and we publish it, and there it is, all printed and official and real. Powerful. Persuasive. Permanent.

And then we read it later–maybe years later–and see how we could have made it better. Or we read it and realize that it’s dated, or we got something wrong, or things just didn’t turn out the way we had envisioned. This can be particularly true for science fiction writers. It doesn’t mean our words or the story they told were not good at the time. But if we were writing the same thing today, with today’s knowledge and understanding and context, we would write it differently. Verne’s From the Earth to The Moon might seem silly now because we know that we can’t travel to the moon by being shot from a cannon–and yet it is not completely without value. It remains fun to read as a product of its time, and it inspired Tsiolkovsky to develop his theory of spaceflight. It has been outdated in some ways, but still forms the foundation of what followed.

Sometimes we have to accept that our words–or words we love, or which have great importance for us–get it wrong, or become outdated, or lose some portion of their value. Maybe it’s a function of the time they were written in; maybe it’s a function of imperfect knowledge by the writer; maybe (and this is the most common, I think) the world just works differently now. Does it really make sense to think that all words written two hundred, three hundred, a thousand years ago can apply to the world today? How much has the world changed in your lifetime, or in your grandparents’ lifetimes?

Words that were written long ago, even very important words–although this is painful for many people to accept–can lose some of their relevance. Sometimes they simply no longer apply because society and social norms and values have changed. Sometimes they have been misinterpreted and the results don’t make sense in a contemporary context. Sometimes they have been perfectly well interpreted–but the results still don’t make sense because the world to which they are being applied is not the same world in which they were written. When, in fact, the world to which they are being applied could not even have been imagined by the writer or writers.

As a culture, we value the power of the written word, sometimes further and more blindly than we should. We think we have “rights” because a long time ago, someone wrote it down and others living at the time agreed with it. We think we know how to live in the world because someone wrote a set of rules that made sense at the time and with the state of knowledge and understanding at that time. This is true for political documents, and religious documents, and historical documents.

We cannot take it as a given that all these written words are infallible or immutable–when we do, we run the risk of allowing their power to become twisted and terrible. We can’t simply point to words and say “See? This says X and so that’s the way things are.” We must ask if we can reasonably expect to apply these writings to a world which would not even be recognizable to those who wrote them. It’s quite possible that some parts will stand the test of time. But from time to time they must be questioned and re-evaluated to see if they still hold true and are still relevant. Sometimes we need to think about what it really is we are trying to defend. We may need to look deeper into words to identify their true meaning, spirit, or intent. Sometimes words are not black and white.

And if they don’t bear up under this close and demanding examination, then maybe it’s time to rewrite them, edit them, or acknowledge that they have outlived their usefulness. They are only words, and they have only as much power as we choose to give them. We can always write more, that will serve us better.