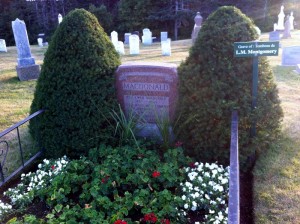 I could hardly come to Prince Edward Island on vacation without taking a few moments to reflect on Lucy Maud Montgomery and her influence on me as a writer, and as a reader.

I grew up reading Montgomery. The big bookshelf at my grandparents’ house, which offered an absolute cornucopia of reading bliss, was well-stocked with Lucy Maud’s books–not only the ubiquitious Anne, but also the Emily books and others. Don’t get me wrong, I liked Anne well enough and read her series quite thoroughly; but it’s the later Anne books I particularly enjoyed, and I think Anne of Windy Poplars is probably my favorite of them.

It was always Montgomery’s lesser-known works that were my favorites overall, though. The Emily series–Emily of New Moon, Emily Climbs, and Emily’s Quest–they spoke to me far more than Anne did. (And before you ask, no, it’s no coincidence that my daughter’s name is Emily.) Emily is the creative one–the writer, in fact, and probably my very first introduction to the notion of the long, slow path of a writer’s life. I think having that understanding has been a great help in finding my own way as a writer.

The Story Girl was another perennial favorite (and its sequel, The Golden Road), as was Pat of Silver Bush, and A Tangled Web.

Looking back, I think the appeal of the books to me as a younger reader and teenager was Montgomery’s deft hand at characterization. These were not thrilling adventure books with complicated plots (although A Tangled Web has a beautifully complex and interwoven storyline), but the characters came to life on the page with vibrancy and color, and their problems, big and little, mattered to the reader as well. They were, overall, “happy ending” stories, but not syrupy–Anne and Emily are both orphans, to start with, and the stories in all the books reflect both the lighter and darker sides of life in the time periods in which they are set. While the Anne books are more romanticized, many of the other titles explore more realistic themes and aspects of life. They are probably, as a whole, the most re-read books for me.

It saddens me somewhat that these stories have gone out of fashion for young readers with the passage of time. But I guess that kind of sentiment makes me sound old and crotchety, so I’ll just end by saying–thanks, Lucy Maud. You made my reading life much richer, and my writing life easier to navigate.