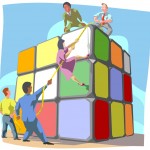 So, What’s Your Next Book About?
Also known as Colleagues

At some point you’ll move into interacting with other writers on a more professional basis. You’ll belong to the same organizations, sit on writerly boards or panels, or share duties as jurors for awards or grants. The keystone for your relationships with colleagues is going to be respect.

You and other writers are going to have different outlooks on innumerable things. That only makes sense considering the huge variety of stories and interests and career paths that exist in the world of books and writing. If you sat down to debate the relative merits of those differences it would take forever and it’s unlikely you’d ever get anywhere near agreement. But that’s not the point, and in your professional dealings with other writers it often doesn’t matter. Your job is not to judge your colleagues. Your job is to work with them in whatever circumstances present themselves.

It doesn’t matter if the writer you’re working with writes in a genre or style you don’t “get.” It doesn’t matter if he or she has reached this career point via a route different from one you’d choose. It doesn’t matter if his or her motivation for writing is completely different from yours. You have to put all of those differences aside and forget about them, because that is what professionals do. Your writing journey is not their writing journey, never will be, and never should be. In the words of Kristine Kathryn Rusch, You are responsible for your own career, and, I would add, not anyone else’s.

This is not to say that in the course of these professional interactions, you won’t disagree with other writers over the things you’re working on or discussing. But you must keep the focus on these things, and not on whether you think the other writer is a hack, a poser, a sell-out, a snob, or any of the myriad other labels we sometimes slap on other writers to make ourselves feel better. There are often issues of ego, confidence, and self-worth bubbling very close to the surface when we interact with other writers, but with a conscious effort we can keep those issues from boiling over.

And even though you are now colleagues, that doesn’t mean you’re not also compatriots. There are still many things you, as a writer, can learn from your colleagues, or pass along to them. Good relationships with other writers are always going to be more profitable for you than bad ones.

A Special Case: Book Reviews
At some point you may find yourself with the job of reviewing or publicly commenting on the work of another writer. Some writers avoid being in this position at all costs, and there’s no doubt it can be a dangerous one. A harsh review could trigger return fire in the form of a harsh review of your own work. Too-glowing commentary might paint you as grovelling or pandering instead of trying to give potential readers a clear picture of the work in question. Because as a reviewer, remember, your duty is to potential readers of the work you’re reviewing.

Some writers try to deal with the problem by deciding that they will only comment on books they can review positively. However, that does open up the question of how to turn down the invitation to review a work without implying that you didn’t like it.

There’s no simple answer to this one, but this might be a place to start: be objective, be honest, and be kind. If you can’t be all three, then don’t review the book. It goes back to the best practices of critiquing other writers’ work when you’re dealing with your compatriots–balance the good with the bad. Don’t make ad hominem attacks. And keep in mind that tastes are extremely personal. I always feel that the best reviews are those that can say, “if you like book X, you’ll probably like (or dislike) book Y.” But each writer must weigh all the considerations and make the decision to review or not for themselves.

Write it down, class: RESPECT. Give it to your fellow writers, and they’ll give it back to you.