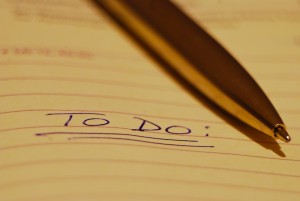 It didn’t take me long to uncover the first mistake in my previous time-organization plan. Because yes, I did have a plan before. In fact, it had two elements. I had a detailed calender laid out in Outlook, blocking off each day into segments, and I also had a “daily slog” list in Evernote, with little checkboxes and everything, so that I could keep track of what I was accomplishing. As well as notes in Evernote for projects, to-do lists, time tracking, etc.

So why wasn’t that working? Why did I still seem to have no time to write?

Very simple. Writing was not the first thing on my list every day.

I’ll say it again: writing should have been higher on the list.

See, my thinking was, get all of that other stuff out of the way first (like website updates, blogging, submission tracking, etc.) and then have a clear mind and conscience heading into writing time. For me, however, that just doesn’t work very well. Because all those other things can 1) take more time than one expects, and 2) lead into other things that will take up even more time. And then before you know it, all the chore time and all the writing time have both been used up.

Why didn’t I see this before? I think because I kept telling myself, “once you get all this out of the way, THEN you’ll have more writing time.” But that’s just a trap for the unwary, because, like housework and laundry, all that other stuff is never finished. I was only fooling myself that things could ever get better under that system.

This seems so simple and self-evident now, I feel rather foolish even admitting it. But that’s the only way I’m going to learn. So, step one, I’ve rearranged my Evernote list to better reflect my priorities. I’ve set time limits for non-writing jobs and pulled out my timer program. It’s only a first step, but I think it’s a good one.

Ready Player One by Ernest Cline
Dusting Things Off