Tales of Tales ~ Part 6: On The Road With Fiamong’s Rule

Writing some stories is an uphill slog from start to finish, while others are so much fun to write that they practically seem to write themselves. “On The Road With Fiamong’s Rule” was one of those pure-fun stories for me.

Yet another of my stories that was idea-sparked by an anthology call, this one was originally written for an anthology looking for road trip stories–with, of course, an element of the speculative thrown in. The idea of a human-alien partnership in that road trip materialized quite quickly, as I recall, and as I said, the story seemed to write itself. This was one that I actually finished before the anthology’s deadline date, submitted and had accepted. Alas, something went wrong with the project, the anthology itself never made it to print, and I had to send the story out looking for another home. Such are the vagaries of the writing life. 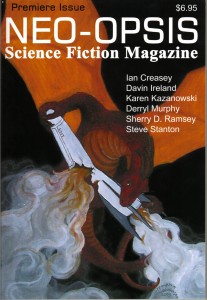 The good news is that it did find another home, in the premiere issue of the Canadian Neo-Opsis magazine. If you look carefully, you can actually see my name on the cover. That was a first for me. Cool!

This story doesn’t follow a strict chronological timeline–there’s a fair bit of jumping back and forth between the “present” of the story and flashbacks to the past and the events leading up to the story’s “present.” I think I was experimenting a bit when I wrote this one, and I’d probably just been reading something that recommended starting a story “in medias res”–in the middle of the action. To illustrate what I mean by that, here’s the opening:

The worst moment of the whole trip came just before three a.m. on Friday. I stood in the driving rain, mud seeping insidiously into my shoes. The alien’s outline looked enormous in the dark, and the tire iron in his hand even more so, silhouetted against the probing glare of the police car’s headlights. When the cruiser had driven past a moment ago I thought we might be in the clear, but no, it had turned and was coming back.

My credit card was still being held hostage by the jerk at the service station and I had lost the rest of my ID in the motel fire. We had to make it to Ottawa by noon the next day or the entire mission could fail. I had about thirty seconds to think of something to tell the police, and if I didn’t get rid of them quickly, the alien would give himself away and we’d both be in the soup.

What was I, a previously normal at-home-mom of two, doing here? Tim was going to be furious when he found out.

Definitely the worst moment of the whole experience. Well, except for what happened later.

“In medias res,” indeed. I think I might have been testing to see just how far into the action one could really start a story. :)