So far I’ve been talking about some of the fantasy stories in the collection, so today I thought I’d move over to one of the science fiction stories. 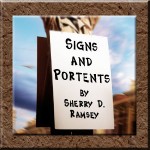 “Signs & Portents” first appeared in Oceans of the Mind, which was a professionally-paying, .pdf-format magazine that published quarterly issues from 2001 to 2006. They were one of the first, as far as I know, to really make a strong attempt at an entirely electronic-based publishing format, and they published some great stories from wonderful writers around the world.

As writers, we’re often asked where we get our ideas. I don’t always have an answer for a particular story, but I do remember this one. Have you ever had the experience of glancing at a note or sign, and reading something quite different than what is actually there? Then you look again and realize that what you thought you saw wasn’t right. Well, there was a period when that seemed to be happening to me a lot.

At about the same time, there was a story going around about a fellow in the nearest city to where I live, who appeared regularly on a street corner, bearing a sign protesting this or that. I don’t know that I ever saw him myself, but an image of him had built itself up in my mind.

So, somewhere in my brain, these two ideas collided (hey, just like in a particle accelerator, which figures largely in the story), and “Signs & Portents” was born. This is the way a lot of my stories seem to happen—two unrelated ideas that meet, shake hands, and decide that they would work well together.

The Sign Man in “Signs & Portents” was one of my favorite characters to write, although he’s not the narrator nor the main character of the story. But I enjoyed figuring out who he was and what he was doing on that street corner, and why his signs were so—well, if I say too much I’ll give things away.

Three days later, my head still bandaged, I walked toward the Sign Man’s corner. He was quiet today. The army fatigues were gone, replaced by a wrinkled blue plaid jacket and paint-speckled olive polyester pants. The ever-present placard read “SPACE SHUTTLES—AS IF!”.

I walked right up to him and just stood for a minute. He fixed me with a placid stare. His eyes weren’t mad at all today. They were quiescent spheres of polished granite.

“How did you know?” I said finally.

“Spare some change?” he asked.

“The space shuttles aren’t real, you know,” he confided. “It’s all just entertainment. Hollywood jerking us.”

“Your sign,” I said. “I saw something on it the other day. A warning, maybe.”

“I’ll sell you the sign,” he offered, tapping today’s placard, “for a dollar.”