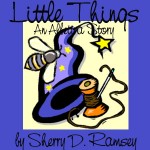 Today I’ve picked another story out of the table of contents for To Unimagined Shores to talk about a little.

“Little Things” is my first-ever published story. It appeared in Marion Zimmer Bradley’s FANTASY magazine in 1997. It’s also the first story I wrote about what turned out to be a series character, a young mage’s apprentice named Albettra. The funny thing about this sale is that I vividly remember getting a postcard in the mail simply telling me that this story was “on hold” at MZBFM. At that time I wasn’t even sure what that meant, but I knew it wasn’t a rejection, so I was ecstatic! I don’t actually remember getting the acceptance letter. The brain is a funny thing.

This was also the first story I’d submitted anywhere. Its sale made me think that this whole getting-published thing was not going to be so difficult after all. Ah, the golden optimism of the beginning writer!

“That ill-begotten son of a cantankerous sow has gone too far this time!” he bellowed, stalking the room with beard aquiver. “The man is a mountebank! A copper coin would be too much to pay for one of his spells! A lying charlatan, that’s what he is, and he dares to spread rumors about me!”

“Zipnax?” I hazarded the name in a small voice.

“Of course, Zipnax! Bah! The name makes my tongue shrivel to say it!” Nissio was flailing his arms wildly now, his robe fluttering madly and his beard flying in every direction.

I was cautiously working my way around to the other side of my worktable. I had never seen the old fellow so angry and I knew I’d feel a lot safer with something solid between us. When his erratic pacing took him near a wall he’d take an angry swing at it with a wizened fist. There couldn’t be much physical strength left in the man, but it didn’t take much to set the walls of the rattletrap cottage swaying. Dust was floating lazily down from the ceiling again and I stifled a sneeze.

“To accuse me of stealing!” the old mage was ranting now. “Imagine me, stealing one of his pitiful ideas!”

The origins of Albettra herself and the idea for this story escape me now, they’re so far back in the mists of time. I do like Albettra, though, and I like the way she keeps turning up in my brain with a story idea in tow. She’s sometimes unsure of herself but feisty when she needs to be, and determined to win out in the end. I suppose, if I get all psychological about it, she’s a bit of a reflection of myself as a writer.

There are four Albettra stories in To Unimagined Shores. I’d like to know what you think of her as a character, if you happen to read them. You can do that in the comments section of this blog, on my Author Central page at amazon.com, or over at Goodreads.

*My more astute writerly colleagues will notice a fair bit of passive voice in this excerpt…probably in the whole story. It’s interesting to note that at the time this story was written/published, it was not considered such a stylistic anathema. It’s an example of the ongoing evolution of writing style that I find fascinating. Anyway, it didn’t feel right to me to re-edit previously published stories for this collection, so I left things like this alone.