I’m just going to quote the Press Release here (which I did NOT write, by the way, because it would have been much briefer and more modest had I done so. That’s why one of my editors/publishers wrote it. :) ) 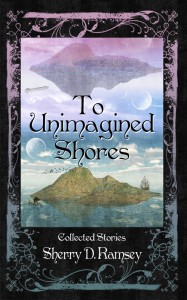 Sixteen stories were previously chosen for publication in an impressive array of international magazines, collections and anthologies including On Spec, Simulacrum, Fantasy Magazine, The Day the Men Went to Town (Breton Books), Michael Stackpole’s The Chain Story Project, Gateway S-F, Neo-opsis and others. The seventeenth is a bonus story, never before published.

The collection is divided into three parts. Part One, Science Fictional Shores, includes seven stories about such intriguing topics as a road trip with a hitch-hiking alien, stolen embryos on a colonized planet, and inter-planetary intrigue involving a savvy Spaceport detective. The second section, Fantastic Shores, contains six fantasy-based stories on such deliciously intriguing subjects as a Victorian time machine, climate change in Hell, and a daughter’s redemption with the help of an unconventional angel. The last section, Magical Shores, boasts four stories which revolve around one main character: a young female apprentice to a crotchety but wise old wizard. The stories are by turns funny, tragic, light-hearted, serious but are always adventurous and unusual. Mark Rayner, author of The Amadeus Net and Marvellous Hairy, writes: “Sherry D. Ramsey’s short stories are filled with vibrant characters, good writing, and thrum with humanity, even when there aren’t many actual humans in the story.”

Ramsey, a former lawyer, is a full-time writer whose unpublished novel, “One’s Aspect to the Sun,” won second place in the 28th Annual Atlantic Writing Competition’s novel category, the H.R. (Bill) Percy Prize. She participates in the Writer’s Federation of Nova Scotia Writers-in-the-Schools program, and serves on the boards of The Writer’s Federation of Nova Scotia, SF Canada and the Northside Victoria CBDC. She has been editor-in-chief and publisher of the award-winning online writer’s resource, The Scriptorium, for a over dozen years and is one of three founders of Third Person Press, local publishers of speculative fiction.

A book launch will be held Tuesday, December 6, 2011 from 6:30 to 8:30 at the Wilfred Oram Centennial Library, Commercial Street, North Sydney. Refreshments will be served, and the author will read from the collection and be available to sign books. The book can be purchased at the launch or anytime from Third Person Press at www.thirdpersonpress.com in both print or e-book formats, as well as through other online book sellers.
___________________________________________
So, what more can I say? I’m very excited and pleased about this volume, which is a pretty good representation of my short fiction published over the past fifteen years. Come to the launch if you can! I’d love to see you there. :)