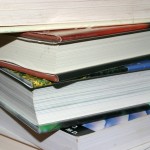 I suppose, since the first day of fall is imminent, it’s a good time to revisit my summer reading list and see how it fared. No need to actually click back to the link, I’ll reproduce the updated version here:

Murderous Magick by Michael A. Stackpole
Remake by Connie Willis
Soon I Will Be Invincible by Austin Grossman
The Girl Who Circumnavigated Fairyland… by Catherynne M. Valente
Suspense and Sensibility by Carrie Bebris
Darwin’s Radio by Greg Bear (a book club book, if we get our book club active again–it’s next on our list, IIRC)
Steam and Sorcery by Cindy Spencer Pape
Wit’s End by Karen Joy Fowler

Wow, so the planned list did not take much of a beating. I did start several more from this list, but they fell to the allure of other titles.

However, this doesn’t mean it was not a good summer for reading. Far from it. I believe I mentioned in the initial post that I am very much swayed by things that come to my attention, and I have no trouble shooting something straight to the top of by TBR pile if I’m in the mood for it. So in addition to the two titles crossed off above, I also read (or in some cases listed to the audio book of):

V and A Shipping by J.R. Murdock
The Secret World Chronicle: World Divided by Mercedes Lackey et als.
The Best Laid Plans by Terry Fallis
The President’s Vampire by Christopher Farnsworth
Hull Zero Three by Greg Bear
Sh*t My Dad Says by Justin Halpern
The Amulet of Samarkand by Jonathan Stroud
The Night Watch by Sergei Lukyanenko
The Ring of Solomon by Jonathan Stroud
Tithe by Holly Black
Blackout by Connie Willis
All Clear by Connie Willis

I enjoyed all of these books to varying degrees, but the standouts for me were the two Connie Willis titles. However, they were all worth the read/listen, and definitely come recommended by me.

I also met my reading goal for the year, set back in January on Goodreads, so everything I read for the rest of the year is gravy. :)