Writing, and Not-Writing that is still Writing 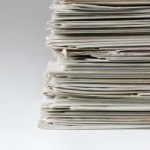 Confused yet? I’ve been musing a bit over the last few days about the various components of the activity we call “writing.” This is the last weekend before my deadline, so although it’s Father’s Day, I made it known that except for a few planned family activities, I would be generally unavailable and secluded in my office, “writing” to finish these revisions.

However, in considering the entire revision process, I spent a lot less time actually writing than I did doing quite a number of other things. All part of the process, but not involving fingers hitting keys. Not all writers revise the same way (do all writers do anything the same way? I am seriously beginning to think not) but for me the process involved:

* re-reading the entire manuscript. This is probably a given for all writers unless they are doing revisions very soon after their previous draft. In this case, I hadn’t even looked at this manuscript for a couple of years, and revisions to plot elements really mean that you have to get the whole novel back in your head at one time. So, I read. Some of it was better than I remembered. I found some typos that had eluded countless previous readings. Slow, but a good process. 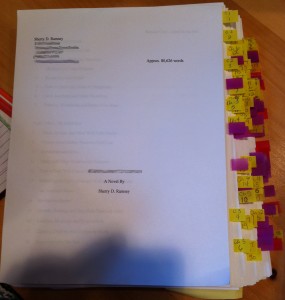 * making notes and markups as I read. I went into the reading with some ideas for how I was going to change things around and what I wanted to add, but a novel is like a house of cards or a standing row of dominoes…what you do in one place can affect many other places. The butterfly effect of novel revisions. So I made a lot of notes on the manuscript pages, and I marked every page where I’d written something with a sticky tab so I could find it again.

* creating a new, detailed outline in Writer’s Cafe. Well, I did have a fairly good outline–not one that I wrote before I wrote the novel, because I don’t do it that way, but that I wrote during earlier revisions. These days I outline as I write the first draft, so that when it comes time for revisions my outline is right there waiting for me, but this manuscript pre-dates that practice. So I added a lot more virtual index cards and a new “storyline” series of cards indicating where I thought the major changes would have to come in. I also tagged the various scenes that needed changes, so I could track my progress at a glance. This was a feature I hadn’t used before, but it will come in very handy from now on.

* brainstorming. Adding and expanding on plot elements means you have to think those elements through as carefully as the original material–possibly even more carefully, because as mentioned above, changing one thing can cause a domino effect. Suddenly a bit of dialogue two chapters further on doesn’t make sense, or a character’s reaction to something might be different. I usually work these things out by writing a lot of longhand notes to myself–exploring changes, asking and answering questions, etc. So I wrote quite a number of notebook pages of notes to myself during the revision process.

* thinking. Ah, yes, thinking. I did a lot of that. Now, if you’d looked at me during some of these thinking periods, you would not necessarily have known that I was working on anything writing-related at all. It might have looked like I was simply staring out my office window, or at the huge map of interconnected wormholes charting the solar systems where the novel takes place. It might have looked like I was tidying my office, or doing dishes, or digging in the garden, or faffing about on Twitter, or reading blog posts. None of that looks particularly like writing at all–but it’s only a mask for the churning cogitative process going on behind the scenes. Remember that if you know a writer. It may look like they’re sitting at their desk staring into space, but before you ask what they’re doing, be sure you want to take the risk that you might burst a critical thought bubble just before it crystallizes.

* actually typing words. Comparing my pre-revision version of this manuscript to post-revision, I see that I’ve so far written just over three thousand new words. I’m almost at the end, so that’s probably not going to increase by a whole lot. Considering that I type between a thousand and fifteen hundred words an hour when I’m composing fiction, one might think I could have completed this revision in a much shorter time frame than the weeks I spent working on it. But none of that typing could have happened without the hours I spent as outlined above, doing all these other things.

Whether or not the publisher will approve of my changes remains to be seen, but it’s been a useful process for me. Not that I haven’t done revisions before, but this time I was a little more aware of the process and how best to approach it, which I think will be useful in the future.

A Garden of Stories and Words
Summer Reading List