The main way to get started as a writer is to write: apply the seat of the pants firmly to the seat of the chair and just get down to it. Having a thousand “good ideas” in your head is no good; you have to get them on paper. Just sit down and do it.
~ Marion Zimmer Bradley, “Advice to Young Writers”

You know, my first story sale was to Marion Zimmer Bradley. My first encouragement as a writer was a postcard from her FANTASY magazine, telling me that my story was “on hold.” As some of you might know, I have a very unreliable memory, but the moment I held and read that postcard is indelibly inked in my mind. I immediately went and read every bit of her writing advice that I could find, and the quote above was part of that. 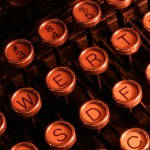 I don’t know that she was the first to impart that advice, but over time it’s been distilled down to the title of this post: “Butt In Chair, Hands On Keyboard.” The distillation makes a handy acronym, sure, and makes non-writers look at you askance when you use it, but every once in a while I like to go back and read MZB’s full quote. There’s a certain simple resonance in her words that you don’t get from the combination of six letters into an unlikely “word.”

I have a good writing friend, Chuck Heintzelman, who is living that advice right now. He has challenged himself to write fifty (50!) new stories this year. (We are not going to talk here about my sad little goal to write five new stories this year. No, we’re not.) And he’s on a roll–as he completes a story he posts it on his website where you can read it for free until the next one goes up. They’re definitely worth checking out and I advise you to click on over and enjoy some while you can.

I’m inspired by Chuck’s project. I absolutely do not have his courage to post new work before it’s been thoroughly vetted by my first readers. I don’t seem to be able to find his drive to write so consistently every day. (Why I can do it for NaNoWriMo but not the rest of the year remains a mystery.) However, his project is making me want to resolve to write more, and more consistently. I need to get my BICHOK.

To make a start, today I did an exercise from my 2011 Working Writer’s Daily Planner. The exercise is to write fifty first sentences without stopping. (Dovetails nicely with Chuck’s fifty stories, no?) I set a timer to see how long it would take me, sat down, opened a numbered list, and started writing.

Thirty-three minutes later I had them. Almost a thousand words. Sometimes I wrote the first two sentences instead of just one. My rebellious side showing there, I guess.

The second part of the exercise is to choose twenty of those sentences that you think have promise, and write a first paragraph to go with them.

I’ll let you know how that goes.