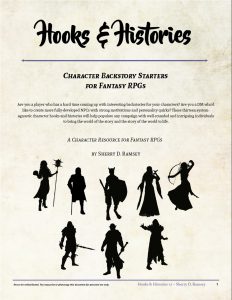 I’m pleased to announce that my first publicly-available gaming resource is live now at DriveThruRpg.com. “Hooks & Histories” is a character backstory builder for fantasy RPGs.

Are you a player who has a hard time coming up with interesting backstories for your characters? Are you a GM who’d like to create more fully-developed NPCs with strong motivations and personality quirks? These thirteen system-agnostic character hooks and histories will help populate any campaign with well-rounded and intriguing individuals to bring the world of the story and the story of the world to life.

Perfect for player characters, NPCs, and other inhabitants of any fantasy world RPG, these backstory starters are wholly character-based, and so can be used in any game system. Whether it’s for a new player who’s having trouble generating ideas for their character’s past, or a recurring NPC a GM would like to flesh out a little more fully, these character-building starters provide a great jumping-off point for characters to grow from.

Each backstory starter can be molded to fit any race or class, and includes a “Qualities & Quirks” section which players and GMs can incorporate as they choose. These are ideas, beliefs, and personality traits that may be used to further develop a character’s roleplay persona. These choices have no effect on game mechanics unless the GM chooses to use them in this way, but allow for deeper and more lively role-playing.

“Hooks & Histories” is just $2.00 at DriveThruRPG.com, so if you’re a gamer (or a writer!) you might want to have a look! The product includes both a stylized version and a tested accessible simplified doc.