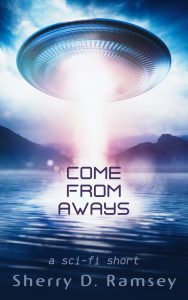 My January release is live! It’s a standalone short story about small towns, strangers, and friends, and you can find it at your favourite retailer by following this link.

Mac Laidlaw returned to his small hometown after a decade away, with big plans to build a theme park and put the place “on the map.”

​​​​​​​For Louise Coldbrook, the town’s mayor (and Mac’s one-that-got-away), Mac’s plans are nothing but bad news. The town has a good thing going–a very, very secret good thing–and the last thing they want is attention from the rest of the world. But Mac’s not a man to take no for an answer…not this time, anyway. And certainly not without a really good explanation, which is the last thing Louise can offer him.

It’s just .99 across all platforms, so what are you waiting for? :) 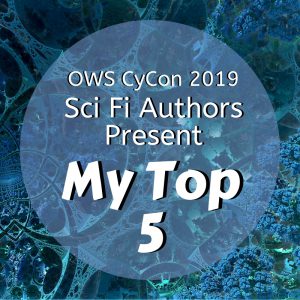 Coming up May 15th-19th I’ll be participating in OWSCyCon, an online genre convention (all genres!),  for readers, authors, and others in the publishing industry. I’ll be hanging around the science fiction, fantasy, and urban fantasy sections, and I have a lot going on that weekend, including a Facebook takeover event, a world-building showcase blog hop, a big giveaway, some Cover Wars brackets, and a Character Battle! Whew, it’s going to be busy and fun.

In the leadup to the convention, some of the Sci-Fi participants are posting “My Top 5” blog posts, and this is mine: My Top 5 Sci-Fi Series Worlds. I love world-building and talking about world-building, so this seemed like a natural fit for me. However, I’ve read books set in many great fictional worlds, so this took some thought! In the end I’m not sure these are truly my “top 5” or if they’re more like “5 of my top favourites plus one,” but I tried. ;) Read on to see what I decided… 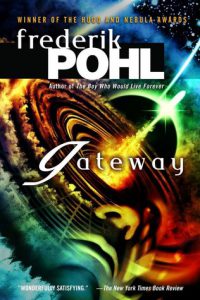 It’s a long, long time since I read Frederik Pohl’s classic series, but the books, the world, and the characters have stayed with me in a way that many don’t. If I recall correctly, I first read Gateway during the university science fiction English course that had a big influence on my life. I think perhaps it made such an impression because it was one of my first introductions to a really believable alien encounter scenario. In Gateway, humans can take chances on piloting mysterious artifact spaceships without knowing where they will take them, and I realize there are echoes of this idea in both the wormhole-spelunking explorers and the types of aliens I try to write in my own Nearspace series–echoes that persisted in my brain for long years after I read the books. If you love a beautifully-realized future with intriguing characters and aliens and a relentless plot, you should give Gateway a try. It’s a classic, but it holds up pretty well. 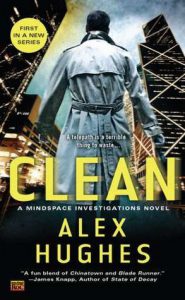 The “world” of the Mindspace Investigations series is our world, but in a future where telepathy is real, Tech Wars have torn the world apart, and telepath/drug addict Adam finds himself pulled and pushed in many directions as he tries to get his life back. I love this series in large part because this world is so well-imagined–I mean, what would humans do if some of us had telepathic powers? How would we react? And how would we function in a world where technology had been forced to fall back from its current prevalent position? It’s all very believably drawn and imagined, and there are so many storytelling possibilities inherent in the world itself! Of course, I’m also a sucker for books that mash up genres like science fiction and mystery, so it’s not surprising I’m sold on this series. If you like that kind of mashup set in a realistic sci-fi near-future, these books are for you.

While Mindspace takes place in our near future, the world of Rimway is far, far off–thousands of years in the future, in fact. Humanity has expanded across many planets and the far reaches of space, artificial intelligence is actually intelligent, and–finally–flying cars! ;) However, against the backdrop of this highly detailed and beautifully imagined future world, humans are still very much the same, which adds so much to the overall verisimilitude of the books. Despite our progress, there are still explorations to be made and mysteries to be solved, so these books offer just what I love in great science fiction.

#3 The Galactic Empire (Janitors of the Post-Apocalypse Series) 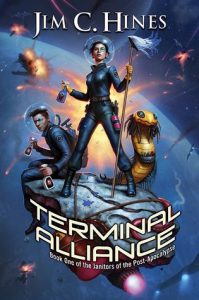 And now for something completely different…janitors in space! In the Galactic Empire of Jim C. Hines’ post-apocalyptic series, humans have been relegated to cleaning the toilets and tidying up after all the other sentient races who’ve fared better than we have through the march of history. I’ve been a fan of Jim’s for a long time and even had the pleasure of belonging to an online writer’s group with him long, long ago. However, it’s the exquisite combination of humour and world-building that really make this “world” a standout for me. I know, I know, there are only two books in the series yet! But that doesn’t stop it from being a definite recommendation from me if you love the lighter side of science fiction.

It’s a little difficult to actually name the “world” where these books take place, since it’s our world in an alternate timeline where time travel is actually possible. However, I have to include it on this list because in the Oxford Time Travel series, Connie Willis actually makes time travel work. This is no small feat and although it’s been attempted a zillion times, writers are rarely able to pull it off without issues. You may not agree with me that this constitutes a “world” but to me it does; and in addition, Willis deftly navigates multiple times and historical events to bring them to life for the reader, while still tying them all together with the timeline and experiences of the main characters from the “present.” I think this series is a magnificent example of world-building, and if you’re skeptical that time travel can really be done well, I suggest you give it a try. You can read almost any of them as a standalone book, although you should read Blackout before reading All Clear, since they’re really one book that was published in two volumes. To Say Nothing of the Dog is one of the few books I re-read on a regular basis. 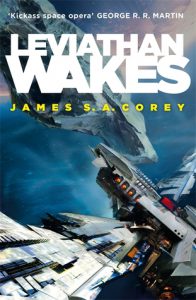 For sheer scale and imagination, I have to give the number one spot on this list to The Expanse. As I wrote in my original review of this first book on Goodreads, I fell in love with it because it had “grand-scale space opera, fascinating characters, tons of complexity and some great sense-of-wonder stuff.” The first book in the series is one of my favourites ever, in part because the world of the Expanse — the Belt, the Outer Planets, all of it — and the inhabitants of the world, are so brilliantly imagined. It all just works, drawing you in and not letting you go. The transition to a television series also seems to have captured this particular world-building magic, although I’ve only seen the first season. All in all, The Expanse has to be #1 on this list.

So, what do you think? Have you experienced any of these worlds? Do you want to fight me over my choices? (Just kidding, I don’t fight on the internets) However, I’m happy to hear your thoughts on the science fiction worlds you love!

OWS CyCon officially runs May 17-19 with the CyCon website and Facebook events acting as the hub for all of our events. Sign up for our newsletter or RSVP to the event to make sure you don’t miss out on any of the bookish goodness we have to offer. Plus, you can read more about our participating Sci Fi authors and their Top 5 favorites in Sci-Fi before CyCon starts. Visit the blog hop page any time leading up to CyCon for the latest posts and your chance to enter our MEGA giveaway (open May 10).