I’m happy to announce that I’ll be presenting a workshop at the end of May in Truro, NS. This is my “Exploring Speculative Fiction” workshop that I did in Antigonish last spring, to *ahem* glowing reviews. Here’s the description:

In this workshop, we’ll explore the map of the many different paths through the landscape of speculative fiction. We’ll talk about what makes a story speculative, tropes and expectations, and what it takes to make a good speculative story work. We’ll discuss the importance in SpecFic of three strong and interconnected story pillars (idea, character, and plot) and the best ways to approach building the world of your story. Finally, we’ll explore paths to finding speculative fiction ideas in the mundane world, and some helpful tools in the pursuit of professional publication in these genres.

This workshop is for anyone interested in writing speculative fiction, whether you’ve already begun your journey, or would simply like to learn more about the genre’s terrain.

P.S. If you leave this workshop without at least one new story idea, you’re just not trying. ;) 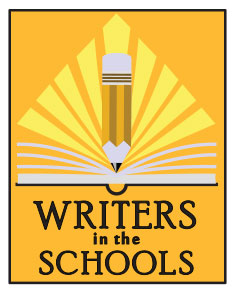 A big thank-you to the staff and students of Shipyard Elementary School for my Writers In The Schools vist there yesterday. I had great fun talking to students in Grades 3, 4, and 5, and your school made me feel very welcome. (Great pizza for lunch, too!) Maybe I’ll see you again next year! 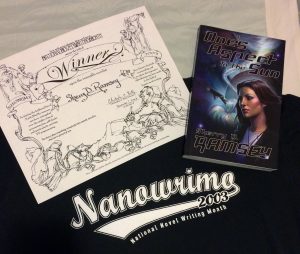 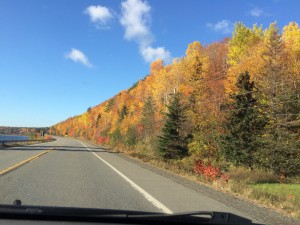 This week’s report comes to you from the convention trail. We’re on the road to Hal-Con 2015 with coffee on board, tunes on the radio, a van full of cosplay and stunning fall foliage all around.

What moments I could snatch at my desk this week were mainly spent on planning for NaNoWriMo. We spent a good evening also brainstorming at the kitchen table for the three novel projects happening in the household next month. Much of my novel continues to float, indistinct as a distant nebula against the velvet black of space. But it will come.

A few times over the weekend, I’ll be hanging out at the Writers’ Federation of Nova Scotia table at Hal-Con. I’ll have books and I’ll be happy to sign them, but drop by even just to say hello!

Yesterday I found out my lineup of WITS visits for this school year. I’m looking forward to interacting with some great teachers and students again this year.

So Friday’s post started off well (although I was composing it on my phone, which was somewhat cumbersome) and then we started running into Generalized Road Difficulties. I won’t go into all the boring details, but simply say that the blog post fell by the wayside as GRDs escalated, and then we were at Hal-Con and that was the weekend.

Hal-Con was great overall, although the weather was cold and rainy off and on, and this year they didn’t have the underground pedways open. So that meant a trip outside for decent food, access to parking, etc. The expanded space this year was great, but the traffic changes, not so much. 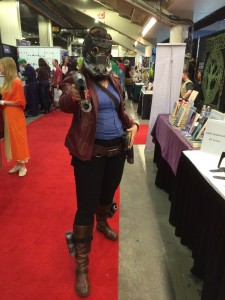 However, I had a spectacular time hanging out at the WFNS table with the Federation folks (Writers’ Federation, not United Federation of Planets, of course), and chatting with/meeting other writers like C.S. MacCath, Clare C. Marshall, Kat Kruger, and B.R. Myers. Sold some books, too, and ran into several old and new friends. Attended some great panels like Whales in Space and Star Trek Empires in the Night Sky, and a very entertaining Q&A with Kelley Armstrong. She answered the question “What’s the hardest thing about being a writer?” with the too-true answer “The hardest thing about being a writer is *staying* a writer.”

And despite yesterday being a travel day, I managed 1136 words to start NaNoWriMo, which was more than I’d counted on. My true daily goal this year is considerably more than the standard 1667, but I was pleased to make a start and discover a character attribute I hadn’t previously known about one of my viewpoint characters. Love it when they surprise me with something. :)

And so, as the Asura say, Excelsior!